» Disgraced Delaware County State Representative Margo Davidson (D, Pa.) decided 'enough was enough', gutting her entire house before her sons are let out of jail. » Her sons, Joel, 26, and Robert, 21, are both incarcerated at George W. Hill Correctional Facility for separate drug cases. » Robert Davidson was under scrutiny for operating a 'drug warehouse' in his mother's jurisdiction. » Police told yc.news that the 'drug warehouse' was full of heroin, cash, cocaine, and a stolen gun. » Joel Davidson was under fire after stealing his neighbor's car and pleading guilty to indecent exposure. » Rep. Davidson faced her own woes after repeatedly ramming a taxpayer-funded vehicle into multiple cars on a suspended license. 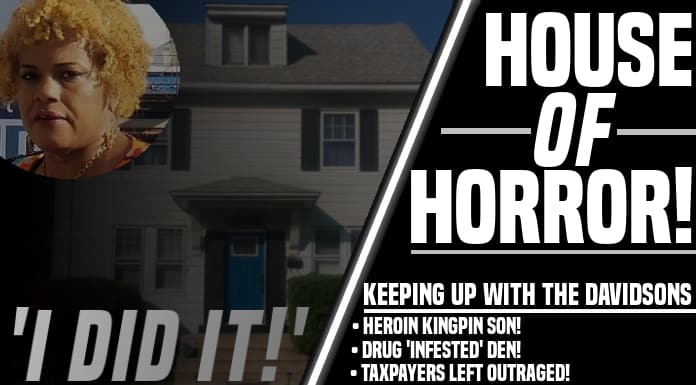 DISGRACED DAVIDSON is completely gutting and redesigning the Lansdowne home her son turned into a filthy drug den to spare her youngest child from the “evil influences” of her out-of-control heroin past, family friends tell yc.news.

“She’s losing her mind,” a recently-retired insider told yc.news. “She thinks that she’s invincible, literally. It’s crazy. She wants to gut the place before her sons are released from jail again.”

“‘I did it!'” State Rep. Margo Davidson told a former staff member, who spoke under the condition of anonymity. “She told me it was her fault that Joel and Rob kept winding up in prison.”

The insider noted that Davidson would bring her children around “thugs” during campaign events, including occasions where her children would work alongside the “thugs” at voting booths to bully locals into making the “right choice.”

“‘I should have left them out of campaigning,'” Davidson allegedly spewed to the former staffer, who noted that the politician would hire individuals with violent backgrounds, including robbery, attempted murder and aggravated assault to work her polling stations on Election Day.

“‘I can’t help it! I don’t know how much longer I can live like this for,'” the rep cried to her friend. “‘Sooner or later, it’s going to crumble.'”

Rep. Davidson is frantic because of her husband’s alleged involvement in “cleaning up” the “trap house” immediately following the arrest of their son, Robert Davidson III, for operating a drug warehouse near the family home.

“She said she’d rather lose her job than have this get out,” the source continued. “She is fighting the county to ensure that the phone calls placed by Robert while he was incarcerated are sealed – this way those conversations never get out.”

According to sources, a Margo Davidson’s husband, Robert, is under investigation by authorities for helping clean out her son Robert’s drug warehouse immediately following his arrest.

“He called his dad when he was being held in the intake unit at George W. Hill,” a well-placed source told yc.news. “His dad was out to dinner with Margo when Robert Jr. called, but he told his dad to clean out the ‘trap house.'”

We broke the story, the crazed politician’s son was arrested for drug distribution before being slapped with additional charges stemming from a shady jailhouse call placed by the state rep’s son.

The shamed stateswoman took to social media Thursday to curse out a constituent for simply asking why she continues to drive on a suspended license.

“I am sorry that you still don’t have a life,” the scandalous politician continued. “Chow, going to live mine.”

“Everything is being torn out of her house and replaced on Margo’s orders,” the former insider told yc.news. “Joel will not have any reminders of the nightmares of that house.”

According to the source, Davidson was fed up after her sons were re-arrested on separate charges earlier this month.

“It’s not going to look like the trashy drug den she let it become before cleaning herself up,” another friend of the Davidson’s said. “She’s determined the place will reflect who she is now, not what she used to be.”

The new Davidson even plans to celebrate the house’s total makeover with a religious ceremony headed by local church folk.

“Margo wants her home blessed,” the insider said. “She’s always been a very spiritual person who believes in the power of good and evil influences. She’s aiming to be what she used to be.”