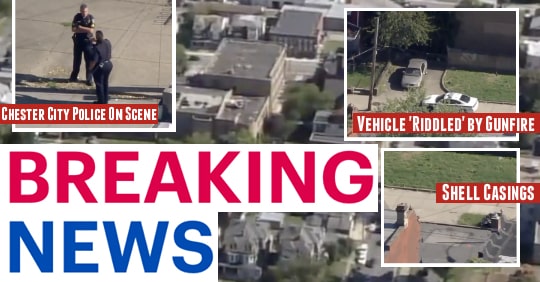 Police in Delaware County swarmed the area of Chester High School Thursday afternoon for a reported shooting, according to dispatch reports. Police have confirmed that the victim was found on the 200 block of West 9th Street located just behind the school.

Gunfire erupted on the 300 block of West 8th Street in the Chester City just before 3 p.m. Thursday striking at-least one victim, police confirmed.

Dispatch audio also indicates that the victim was not inside of the school, possibly off to the side of the building. Photos obtained by local ABC affiliate WPVI showcase several evidence markers where shell casings were recovered.

Police also found a vehicle riddled by gunfire on the 300 block of West 8th Street.

It is unclear if any students were involved in the altercation.

The victim was taken to Crozer-Chester Medical Center by paramedics. The condition of the victim is unknown at this time. Medics also responded to the intersection of 8th & Fulton Street, though no other victims were immediately reported.

“Kids fight everyday,” a resident who resides on the 200 block of West 9th Street told us, under the condition of anonymity to avoid retaliation. “This [isn’t] a ‘gun-control’ issue. The sentence for murder is life in prison and adding an extra few years for a gun charge ain’t go[ing] to stop this.”

According to the resident, students gather to fight on a regular basis in the area of the school. “I doubt someone would be stupid enough to shoot someone near a school unless the shooter was a young person who was leaving school.”

It does not appear to be an active shooter situation, but several other schools have been placed under lockdown until further notice. Follow the updates below for the latest information:

UPDATE – 3:56p: Police confirm the victim was found on the 200 block of West 9th Street near the school, not on school property.

UPDATE – 3:50p: Police will be stationed at schools as they let out. It appears that lockdowns have been lifted.

UPDATE – 3:20p: Police requested assistance at Crozer-Chester Medical Center to assist with crowd control. Several schools remain on lockdown. It appears that there is one victim, according to dispatch.