Second Man Comes Forward After Cop Kneels on His Back, Cop Arrested: ‘I Can’t Breathe’
S 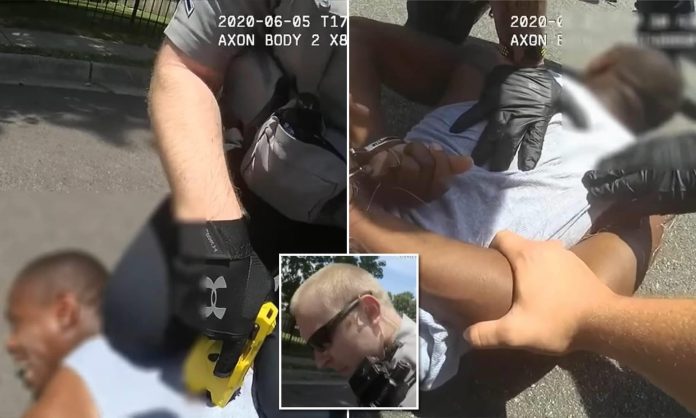 A SECOND kneeling cop has been charged with assault after bodycam footage shows him repeatedly using a Taser on a man while kneeling on his back as the victim pleads ‘I can’t breathe,’ Your Content has learned.

Footage begins with an unidentified Fairfax police officer interacting with a man who appears to be disoriented and pacing along a residential street.

“’I’m here to help you, just tell me what you need,” one medic urges, adding that authorities are there to help the man.

The man continues to pace when Timberlake suddenly arrives to the scene in a police cruiser and approaches the man.

Without warning Timberlake appears to deploy a stun gun, prompting the man to scream out in pain and drop to the ground.

Timberlake then presses his knee into the man’s back, repeatedly telling the man to relax, and appears to strike the victim with the gun when he did not comply.

For a brief moment the body camera footage is covered, but the sound of the stun gun being deployed is heard and Timberlake is soon videoed aiming the tool at the man’s back.

Timberlake, an eight-year law enforcement veteran, was arrested on three counts of assault and battery in connection to the incident. He faces up to 36 months in prison if convicted.

“As an officer attempted to deescalate the situation that was underway, PFC Timberlake arrived shortly after and used force that is unacceptable,” the Fairfax County Police Department said in a statement.

He added that Timberlake committed “criminal acts’ that both ‘violate our oath of office” and “ignore the sanctity of human life,” according to CNN.

“The video also erodes the public’s trust of police officers, not only in Fairfax County, but throughout this world. These acts are unacceptable,” said Roessler

The victim, who was treated at a local hospital after the incident, and his mother were contacted by Roessler after the fact.

Fairfax County Commonwealth’s Attorney Steve T. Descano revealed that he was made aware of the footage by Roessler ahead of charging Timberlake.

“I want our community to know that we are pursuing charges that are in line with current law and supported by the evidence with which we have been presented.

“However, I also appreciate that this may not immediately reconcile our feelings about what we see.”