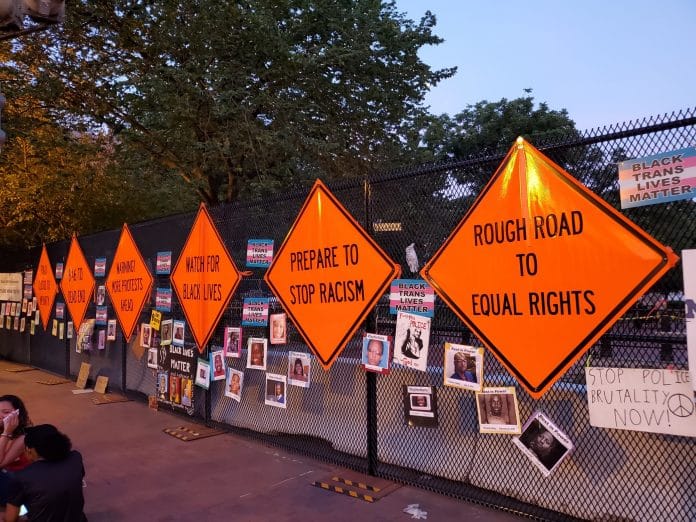 PROTESTERS trashed the barriers and streets nearby the White House Friday night after marking their territory with construction signage, paper flyers and photos of individuals who were killed by police.

President Trump and first lady Melania Trump will host a viewing party on the South Lawn of the White House, an event that comes the day after they’ll be at Mount Rushmore to observe the return of the fireworks celebration there.

Interior Secretary David Bernhardt announced the mask distribution when he outlined the plans for this Saturday’s celebration, which includes ‘multiple flight demonstrations from different branches of our military, in particular the U.S. Air Force Thunderbirds and the U.S. Navy Blue Angels, and a monumental firework display,’ he said in a statement.

“President Trump’s 2020 Salute to America will be a patriotic tribute to our men and women in uniform,” Bernhardt said.

White House press secretary Kayleigh McEnany said Wednesday that the CDC recommendations on masks does not make wearing them mandatory.

‘The president has said that we should follow our local authorities with masks, so that’s the decision,’ McEnany said. ‘He encourages people to follow those authorities. CDC guidelines, I’d also note, say recommended but not required and we are very much looking forward to the Fourth of July celebration.”