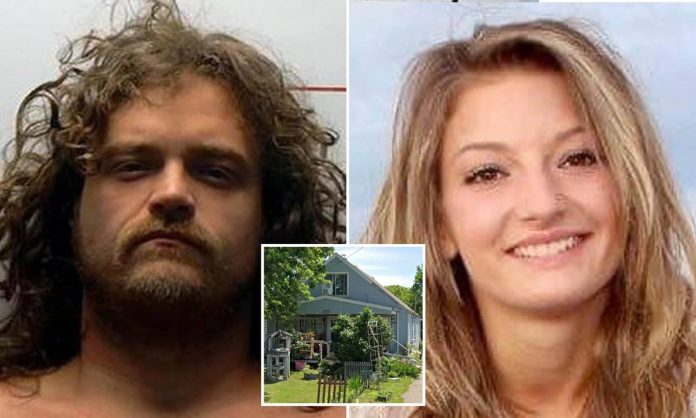 AN OHIO self-admitted child predator is back behind bars and charged with gross abuse of a corpse after police say he mutilated the body of a young woman he found hanging in his basement by cutting off all her fingers, removing her tattoos with a razor and then stuffing her into a barrel.

What’s more, the deranged man then stuffed her in a barrel!

The Butler County coroner’s office said the remains of 21-year-old Cecily Cornett, of Somerville, were found in June 30 in the barrel at the home of William Slaton, 35, on Yankee Road in Middletown.

Police arrested Slaton, whose criminal record includes a child pornography conviction, after he allegedly tossed the barrel containing Cornett’s naked body over a backyard fence when officers arrived, according to the Dayton Daily News.

The cause and manner of Cornett’s death are pending. Cops have not suggested that Slaton killed her.

When officers opened the drum, they found Cornett’s body covered in blowflies, according to The Cincinnati Enquirer.

In addition to abuse of a corpse, Slaton is also charged with evidence-tampering and failure to report a crime or death.

According to court documents, Slaton told detectives that he woke up one morning in late June after a night of using drugs and went downstairs to find Cornett hanging in the basement.

Slaton then allegedly cut off the woman’s fingers and used a razor to slice off all of her tattoos.

The records allege the monster then placed the severed fingers and the skin in a bowl, sealed it and placed it in the basement.

During his interview with police, Slaton allegedly admitted to leaving Cornett’s body in his cellar for several days, before stuffing it in the metal drum in his cluttered backyard.

An unnamed woman who lived in Slaton’s home called a relative who lives in Tennessee to share information about Cornett’s death, and that person tipped off the local police.

“There is supposed to be a person who died of an overdose three day ago at [3200 block of] Yankee Road. As far as I know the body is still there that’s what I was told,” the unnamed caller told a 911 dispatcher last week. “She said somebody overdosed a few days ago and somebody put it in a 55-gallon drum in the backyard.”

Slaton appeared in court last Wednesday and had his bond set at $210,000. Police said he could face additional charges once the results of Cornett’s autopsy are released.

“For everyone spreading rumors or telling lies……. out daughter Cecily Cornett was not unloved and was not homeless and was not a drug addict,” the mom wrote in all caps.

“Some sick evil demon monster took and mutilated her beautiful body for a reason……. and he will pay for it!!!!!”

Records indicate that Slaton has a criminal history going back at least a decade.

In 2011, he was charged with eight counts of illegal use of a minor in nudity oriented material or performance and four counts of pandering sexually oriented matter involving a minor.

Slaton pleaded guilty to six child pornography counts and was sentenced to seven years in prison.

He was released on supervision in May 2018.