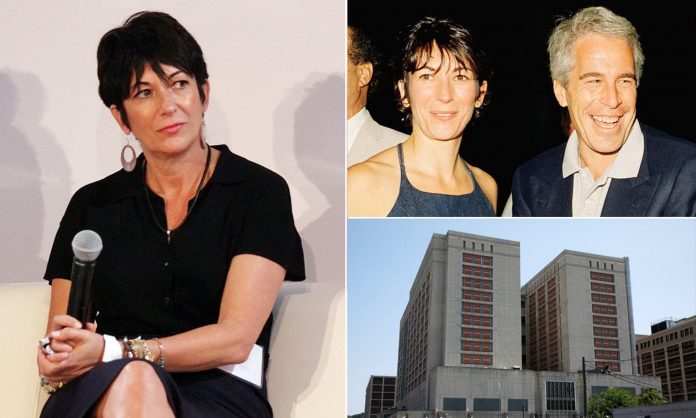 Ghislaine Maxwell was DENIED bail and must stay locked up until her July 2021 trial as judge rules Esptein’s ‘madam’ has shown ‘sophistication in hiding her finances and herself and poses significant flight risk,’ Your Content can reveal.

Maxwell is accused of grooming girls as young as 14 for Jeffrey Epstein to abuse between 1994 and 1997, a period when she was his girlfriend.

The British socialite was dressed in a brown shirt on Tuesday afternoon, with her normally short hair in a bun and not wearing a face mask, according to reports, as U.S. District Judge Alison Nathan set an anticipated trial date for July 12, 2021.

Her legal team had offered a $5 million bond co-signed by two of her sisters and backed up more than $3.75 million in property in the UK.

The 58-year-old would be confined to a ‘luxury hotel’ in the New York area, surrender all her travel documents and be subject to GPS monitoring.

She is currently being held in the fortress-like Metropolitan Detention Center in Brooklyn where she is wearing paper clothes to ensure she doesn’t kill herself.

She faces up to 35 years in prison if found guilty of the charges, as prosecutors argued that along with her three passports, connections to some of the world’s most powerful people and her own fortune of more than $10 million – Maxwell has every incentive to try and flee.

New York prosecutors said Maxwell was ‘skilled at living in hiding’ has ‘few if any’ community ties and therefore should be denied bail because she is the ‘very definition of a flight risk’.

At the hearing, two victims also argued she was a flight risk, with one writing in a statement: ‘Without Ghislaine, Jeffrey couldn’t have done what he did. She is a predator and a monster.’

Maxwell’s attorney Mark Cohen argued she was not a flight risk, claiming she has community ties and is ‘part of a very large and close family’.

He said: ‘Our client is not Jeffrey Epstein, and she has been the target of endless media spin’.

Prosecutor Moe later responded to Cohen’s claim of ‘media spin’, saying: ‘These are the facts. It is not dirt, it is not spin, it is evidence to the court.’

Cohen claimed Maxwell had received numerous threats and denied that she had refused to open her front door to the FBI when they raided her home on July 2.

He claimed her front door was unlocked and the windows were open, saying she ‘surrendered’ to the agents.

Cohen went above the issue of Maxwell being a flight risk to complain that the charges against her are from 25 years ago, calling the indictment ‘an effort to dance around’ the controversial non-prosecution sweetheart deal Epstein and his associates received in Florida in 2007.

Officials said her conduct during the 8.30am raid on July 2nd at the property called ‘Tuckedaway’ in the rural town of Bradford, New Hampshire was ‘troubling’.

They wrote that when the FBI arrived they were confronted by a locked gate which they forced their way through.

The filing said: ‘As the agents approached the front door to the main house, they announced themselves as FBI agents and directed the defendant to open the door.

‘Moreover, as the agents conducted a security sweep of the house, they also noticed a cell phone wrapped in tin foil on top of a desk, a seemingly misguided effort to evade detection, not by the press or public, which of course would have no ability to trace her phone or intercept her communications, but by law enforcement’.

Maxwell was arrested on July 2 at her $1 million home called ‘Tuckedaway’ in the rural town of Bradford, New Hampshire.

According to reports she had moved 36 times in the year since Epstein killed himself in jail out of fear for her safety.

Prosecutors will likely be looking to do a plea deal with Maxwell to lighten some of the six charges against her, two of which are perjury for allegedly lying during depositions.

They will be questioning her about powerful men in Epstein’s orbit including Bill Clinton with whom she flew on Epstein’s private jet, called the ‘Lolita Express’, on a tour of Africa in 2002.

Maxwell was also good friends with Prince Andrew and one of Epstein’s victims, Virginia Roberts, claims she was loaned out to the Duke three times for sex when she was 17.