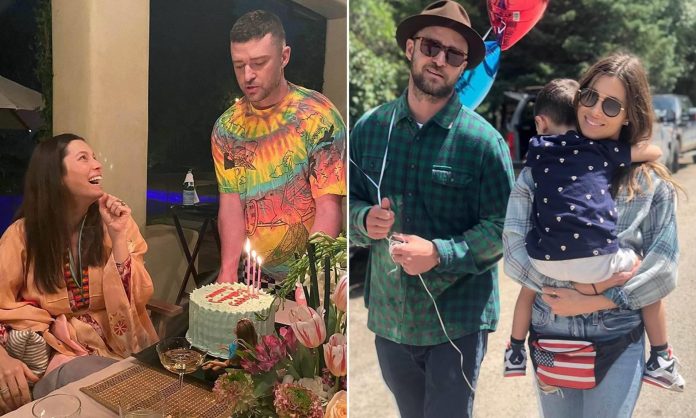 JESSICA Biel and Justin Timberlake have welcomed a baby boy after a secret pregnancy, Your Content can reveal.

The 38-year-old actress gave birth to a baby boy earlier this week and is currently cuddled up with the newborn, her singer husband Timberlake, 39, and eldest son Silas, five.

Jessica and Justin go way back as their love story spans more than a decade after their meeting in 2007.

They have been married going on eight years in October after they tied the knot in Italy in 2012.

Timberlake and Biel have not been pictured publicly since March and are thought to have been staying at their home in Big Sky, Montana, since March 25.

Jessica’s mom Kimberly Conroe Biel, 65, was said to have devoted much of the past week in the company of her daughter and her newborn, according to DailyMail.com.

MailOnline exclusively learned that Biel’s mom plans to stay with her and Timberlake at their Colorado estate until Sunday and confirmed the sex of the new baby to the British tabloid.

An Instagram photo posted that day by Timberlake shows Biel from a distance standing in a snowy valley surrounded by mountains.

No photos showing Biel from the waist down have been released since her birthday in March, when she would have been around four months pregnant.

The lovebirds were photographed in their Los Angeles estate — with Biel in her pajamas and shrouded in a loose robe while blowing out candles on a cake held by Timberlake.

On July 4, Biel posted a video on Instagram from 2019 showing herself and Timberlake learning how to throw axes at targets.

The birth of the couple’s new son comes just eight months after Timberlake was caught canoodling with his co-star Alisha Wainwright, 31, during a night out in New Orleans.

Two weeks later, Timberlake apologized to Biel for the indiscretion with an Instagram post in which he admitted to drinking too much on the night in question.

Timberlake wrote: “I stay away from gossip as much as I can, but for my family, I feel it is important to address recent rumors that are hurting the people I love.

“A few weeks ago, I displayed a strong lapse in judgement – but let me be clear – nothing happened between me and my co-star.

“I drank way too much that night and I regret my behavior. I should have known better. This is not the example I want to set for my son.

“I want to apologize to my amazing wife and family for putting them through such an embarrassing situation, and I am focused on being the best husband and father I can be.

“This was not that. I am incredibly proud to be working on Palmer. Looking forward to continuing to make the movie and excited for people to see it.”

Biel is said to have forgiven Timberlake and has used her social media to declare her love for him and their older son Silas.

On May 10, she posted a family snap which appears to have been taken in Montana, and which read: “These two people make being a momma the greatest job in the whole world! The moments spent with you are truly the most precious and funniest and glorious times of my life.

Neither Biel nor Wainwright have ever publicly addressed the incident, according to British tabloid Mirror UK.

The adorable duo are thought to be in Big Sky, Montana, with their two children where they have been spending time amid the coronavirus pandemic.

Biel and Timberlake began dating in 2007 and tied and held the knot in 2012 – making them one of the longest-lasting Hollywood couples in modern history.