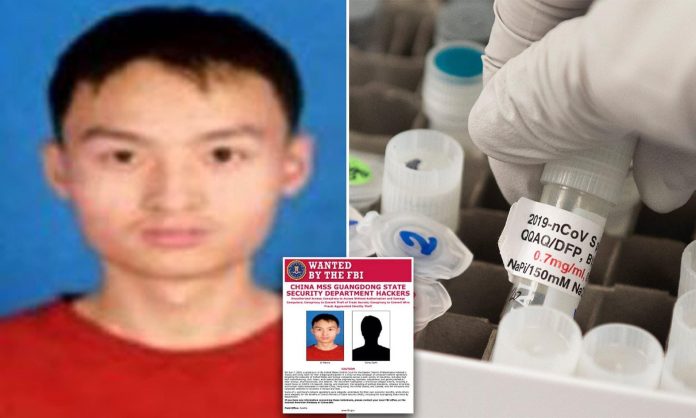 FEDERAL AGENTS announced two Chinese hackers, 34 and 33, are charged with trying to steal the United States’ coronavirus vaccine research along with ‘hundreds of millions of dollars’ worth of other sensitive government information, Your Content has learned.

Li Xiaoyu, 34, and Dong Jiazhi, 31, allegedly stole ‘hundreds of millions of dollars’ worth of trade secrets and sensitive government information.

The decade-long scheme reportedly involved the hacking of hundreds of government organizations and private companies, including COVID-19 labs.

The government said the plot was not only carried out for financial gain but also for the direct benefit of the Chinese government.

The indictment says the two men were assisted by an unnamed Chinese intelligence officer who is known to the grand jury.

“The hackers stole terabytes of data which comprised a sophisticated and prolific threat to U.S. networks,” Assistant Attorney General for National Security John Demers said during a press conference in New York.

The two men were indicted by a grand jury for the purported hacking campaign, which not only targeted companies in the US, but also in Australia, Belgium, Germany, Japan, Lithuania, the Netherlands, Spain, South Korea, Sweden, and the United Kingdom.

Among the 13 US victims were the Department of Education’s Hanford site in Washington, a California tech and defense company, a Maryland tech and manufacturing company, a Texas engineering firm, a Virginia defense contractor, a Massachusetts software firm, a California gaming software company, and several U.S. drug makers.

“In at least one instance, the hackers sought to extort cryptocurrency from a victim entity, by threatening to release the victim’s stolen source code on the Internet,’ the FBI said. ‘More recently, the defendants probed for vulnerabilities in computer networks of companies developing COVID-19 vaccines, testing technology and treatments.”