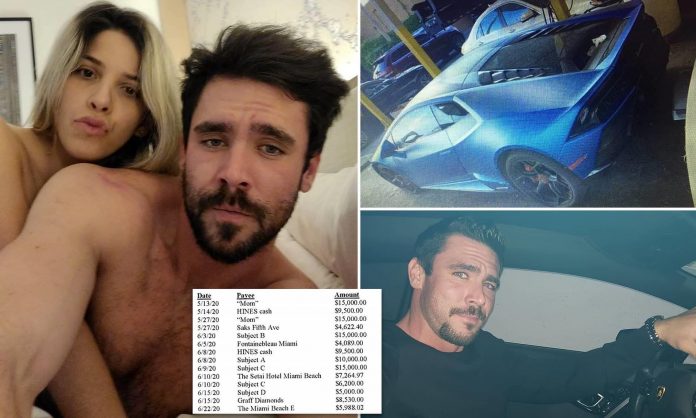 A Florida man ‘fraudulently claimed $4 million in PPP loans through his moving companies and spent the money on a Lamborghini, dating sites, shopping trips at Saks and stays at luxury Miami hotels,’ according to a criminal complaint filed and obtained by Your Content.

He claimed that he had hundreds of employees across four companies – Unified Relocation Solutions, Promaster Movers, Cash-in Holdings LLC and We pack Moving LLC – and that he needed $13million to keep paying them.

In reality, prosecutors say he had 12 employees and that his business ‘inflows and outflows’ were around $200,000 a month.

He is accused of spending some of the money he received on stays at luxury hotels in Miami along with the car, and on clothes from Saks.

The criminal complaint against him also claims he spent money on dating websites.

They both ended up being arrested for battery.

According to the criminal complaint, Hines claimed he needed $4million a month to pay employees.

Hines claimed on the applications to have dozens of employees across his four businesses.

In fact, his ‘payroll’ amounted to around 12 people and he paid them on Venmo or Zelle.

The largest payment noted in the complaint is for $3,000.

Before the payments, Hines had just 30 cents in one of his business accounts and another was more than $31,000 overdrawn.

Hines then made several direct deposits. He labeled a two $15,000 payments as ‘Mom’, and gave three unnamed people similar amounts.

Federal investigators linked the Lamborghini to Hines after he became involved in a hit-and-run accident on July 11.

He was arrested on July 27 and appeared in Miami federal court charged with fraud and other offenses.

At the time of his arrest, authorities seized the 2020 Lamborghini Huracan valued at $318,000, as well as $3.4 million from his bank accounts.

Hines was granted a $100,000 bond to stay at his mother’s home with a GPS monitor.  His arraignment is scheduled for October 14.

It is not the first time Hines has been arrested.

In 2018, he flagged down police claiming his then girlfriend, Brianna Rodriquez, had stolen his Lamborghini.

After asking the police for help, he became non-cooperative and both he and Rodriquez were charged with battery.