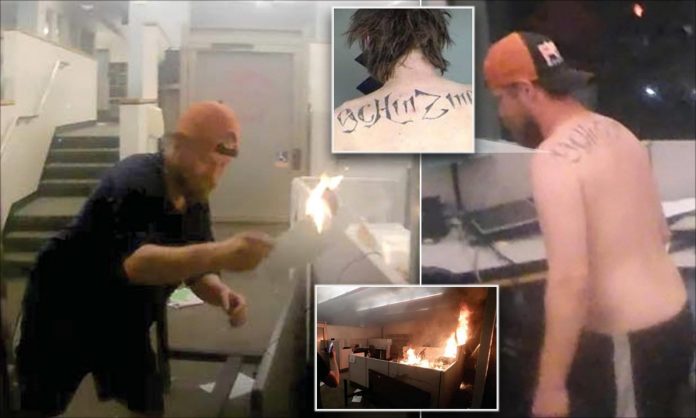 A 32-year-old man has been arrested and charged with arson for allegedly setting fire to a public building during the early days of George Floyd protests in Portland.

The unintelligent vandal was identified by a comparison with a jail booking photo and a distinctive tattoo of his last name across his upper back, federal authorities said.

Edward Thomas Schinzing, 32, is accused of using fire to ‘maliciously damage’ the city’s Justice Center which houses the Multnomah County jail and the Portland Police Bureau headquarters, on May 29.

Footage from YouTube, Twitter, surveillance cameras and photos shared online showed the suspects vandalizing the office space where three county employees had been working before being forced to flee.

His tattoos had been visible in photographs of crowds marching across the Burnside Bridge before he entered the building.

Schinzing appeared in federal court on Tuesday where he was charged with arson – a felony offense that carries up to 20 years in prison with a mandatory minimum sentence of five years.