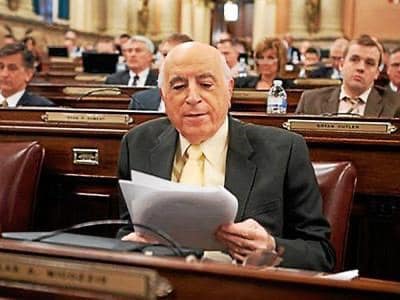 “He was the best as far as I was concerned. He taught me how to deal on a local level, to give back to the constituents and to understand what was going on. He was unbelievable.”

He also served as an Upper Darby councilman for 19 years, many of them while simultaneously working as a state representative.

“Most people don’t know what it takes to be an elected official, especially a state rep.,” Micozzie told the Delaware County Times in a phone interview immediately after his 2014 retirement.

“I go up now and come back either Wednesday or Thursday. You’re away from home three or four days a week. Of course, the campaigns, they get more and more brutal. I’m at the age now where it’s time to spend more time with my wife.”

Prior to his time in public office, Nicholas A. Micozzie gave four years of service to the U.S. Military (1950-1954) as a staff sergeant in the Air Force. Nick was first stationed at Keesler Airforce Base in Biloxi, Mississippi where he graduated from and taught at their Electronic Schools.

He was then assigned to James Connally Airforce Base in Waco, Texas.

He was tasked with supervising a radar maintenance group and eventually with teaching basic electronic and radar technology. After his discharge, Nick worked for 20 years in the private sector at the General Electric Missile and Space Department in Philadelphia as an Electronic Computer Specialist.

He earned a Bachelor of Science degree in business administration in 1963 from St. Joseph’s College (now St. Joseph’s University).

Nick met his wife June when they were both stationed in Waco, Texas.

They were married on October 10, 1954. They have three children: Kathleen Micozzie O’Connor, Thomas N. Micozzie, and Kelly A. Micozzie-Aguirre.

Nick was first elected as an Upper Darby Councilman (1971-1989) and then as the Pennsylvania State Representative for the 163rd Legislative District (1979-2014).

He served as both an Upper Darby Councilman and a State Representative from 1978 to 1989. Nick furthered community engagement outside of his government roles, as well.