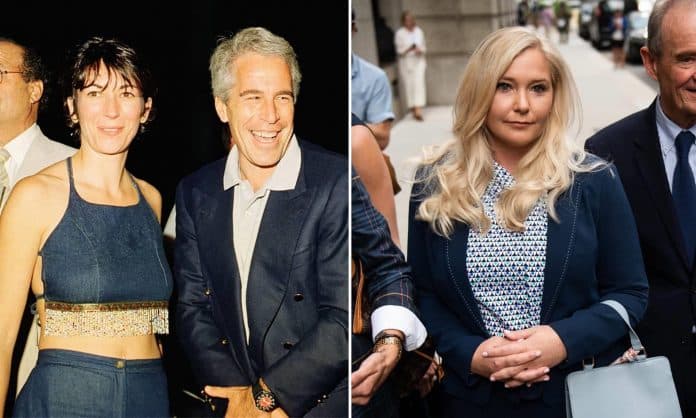 The late billionaire pedophile and his alleged madam told Virginia Giuffre they didn’t want black girls for their sex massages, according to a 2011 taped conversation between Giuffre and her lawyers, Your Content has learned.

A trove of court documents were unsealed Thursday and include a transcript of a three-way call between Virginia Giuffre and her lawyers.

In the call she detailed that Jeffrey Epstein and Ghislaine Maxwell specifically told her to recruit young girl for sex but they ‘couldn’t be black,’

She said that both Maxwell and Epstein gave the orders and said ‘Jeffrey asked most girls to bring a friend and make extra money.’

Giuffre went on to describe the disturbing detail of her first sexual encounter with Epstein and Maxwell at his Florida mansion.

A ruling by the US Court of Appeals last year led to the release of over 2,000 previously sealed documents in Giuffre’s defamation lawsuit against Maxwell.

A transcript of the three-way phone call was released last night amid a slew of newly-unsealed court documents from Giuffre’s 2015 lawsuit against Maxwell – after a failed ‘eleventh hour’ attempt by the alleged madam to keep the files secret.

“What instructions were you given about what to look for?” Scarola asked Giuffre in the 2011 conversation.

“Young, pretty, you know, a fun personality. They couldn’t be black,” Giuffre replied. “If they were any other descent other than white, they had to be exotically beautiful. That was just about it.”

When asked who gave her those criteria, the alleged former sex slave said “They both gave us the instructions, and it wasn’t just me, Jeffrey asked most girls to bring a friend and make extra money.”

In the documents, Giuffre made six references to Clinton, claiming he also visited Epstein’s private Caribbean island – an allegation that Clinton has previously denied.

“You know, I remember asking Jeffrey what’s Bill Clinton doing here kind of thing, and he laughed it off and said well he owes me a favor. He never told me what favors they were. I never knew. I didn’t know if he was serious. It was just a joke,” she said.

“He told me a long time ago that everyone owes him favors. They’re all in each other’s pockets.”

When asked where Clinton was, Giuffre told the attorneys: ‘On the island.’

She claimed that Maxwell and two ‘young girls’ from New York were also on the island when Clinton visited with Epstein.

When lawyers asked if all of them were staying on the island ‘including Bill Clinton’, Giuffre replied: ‘That’s correct. He had about 4 or 5 different villas on his island separate from the main house and we all stayed in the villas.’

A New York federal judge is now deciding which further documents to release in the case, amid bitter opposition from Maxwell and her legal team.