Last Blockbuster in the World Transformed Into Must Visit Airbnb
L 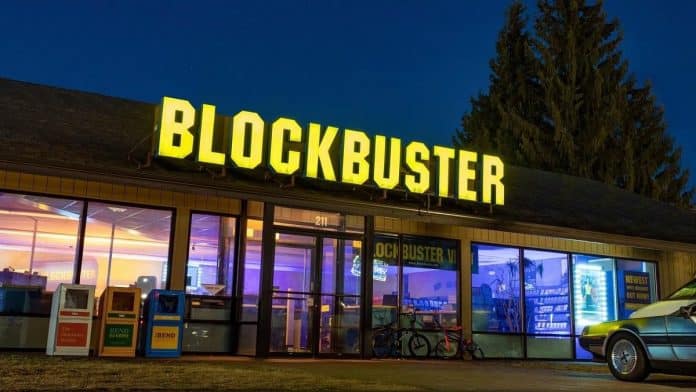 The world’s last surviving Blockbuster Video has remained a tourist destination for years, attracting film loving pilgrims from all over the globe with its soft blue and gold glow and promised return to simple times gone by.

Since 2004, store manager (and would-be superhost), Sandi Harding, has run the operation in the spirit of the time when Blockbuster stores and their laminated rental cards and late fees were part of the cultural vernacular, when everyone was encouraged to “Make it a Blockbuster night!”

But with COVID-19 continuing to ravage the country, the oft-visited Bend, Oregon, movie haven has been forced to adjust its tourism policies.

Problem is, you’ve got to be located in Deschutes County, where the last ever Blockbuster is located in Bend, Oregon. Sandi Harding, the store’s manager, is offering three one-night reservations in September as a way to thank her local community.

“In appreciation for all that the local community has recently done to support the last-of-its-kind during these uncertain times, this end of summer sleepover will offer movie lovers in Deschutes County the chance for a 90s-themed stay to relive the bygone Friday night tradition just as we remember it,” read a press release.

Deschutes County residents can reserve a stay starting August 17 for just $4 on September 18, 19, and 20. That’s just a penny more than a movie rental. Guests will have the entire place to themselves, it’ll be cleaned according to COVID-19 standards, and the candy is up for grabs. Just look at this sweet set-up.

“Whether you want to stay up until sunrise or pass out on the couch, we’ve created the perfect space complete with a pull-out couch, bean bags and pillows for you to cozy up with ‘new releases’ from the ‘90s,” it reads. “Crack open a two-liter of Pepsi before locking into a video game, charting your future in a game of MASH, or watching movie after movie. But be wary of reciting ‘Bloody Mary’ in the staff bathroom off of the break room, as you just may summon the ghost rumored to haunt the store.”

The Blockbuster in Bend became the last of its kind after outposts in Alaska and Australia shut down. It has remained open during the pandemic, albeit with lots of extra disinfecting and curbside pick-up. People apparently appreciated the effort.

“I had a customer come in and she said, ‘I am so grateful that you reopened, because I couldn’t flip through Netflix one more time,'” Harding told Vice in May.