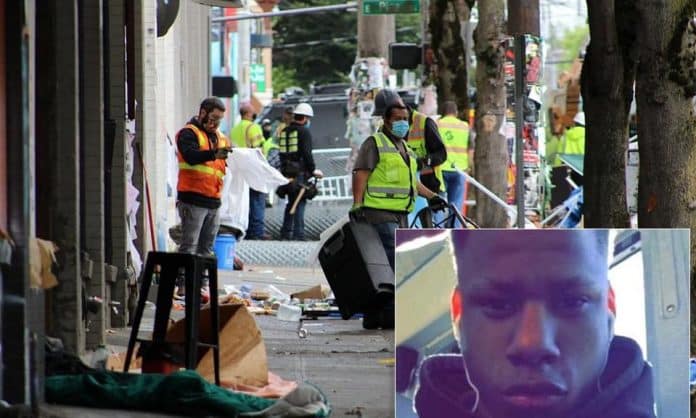 The father of a man killed in Seattle’s CHOP zone is suing the city for $3 billion for allowing protesters to create ‘a state of lawlessness,’ Your Content can report.

Horace Lorenzo Anderson, 19, was shot and killed in the early hours of June 20 within the Capitol Hill protest zone known as CHOP, Capitol Hill Organized Protest.

Ambulances were unable to reach Anderson as Seattle police said they could not clear the area due to a siege by Antifa. Anderson was brought to the hospital by volunteer medics.

Long was allegedly seen on surveillance video approaching Anderson and pulling out a gun. He is then seen then chasing Anderson, who ran away, and appears to shoot him.

His father, Horace Lorenzo Anderson Sr, filed a suit this week against the city of Seattle, King County and the state of Washington.

The claim states the three governments are to blame for creating a ‘hazardous, and lawless situation’ that resulted in Anderson’s killing.

‘This case warrants punitive or exemplary damages in order to punish the City of Seattle, County of King, the State of Washington and their agents for their outrageous conduct that allowed lawlessness to reign,’ said Evan M. Oshan, Anderson’s attorney, in a statement obtained by The Center Square.

“Such failure to protect citizens must not be allowed to happen again.”

The court documents state that Anderson ‘laid bleeding to death in the Seattle streets with no one to respond.’

‘With no assistance or rescue from Seattle first responders, Lorenzo died in agony from his wounds,’ they claim.

They say the local and regional authorities ‘did not intervene and stop this state of lawlessness.’

Anderson’s father told The New York Post: ‘Everyone was walking around with guns. It’s like the wild wild west.’

He said he was shocked the authorities had ceded control of the area.

‘You figure the police come in and they shut it down and clean up the area.

‘I never knew that people could come in and take over a whole city. That means there is no safety. The police aren’t doing their job.’

Shortly after his son’s murder, he told Fox News that he had been left in the dark about the circumstances.

‘They need to come talk to me and somebody needs to come tell me something, because I still don’t know nothing,’ he told Sean Hannity on July 1.

‘Somebody needs to come to my house, and knock on my door and tell me something. I don’t know nothing. All I know is my son got killed up there.’

The city has 60 days to respond to the claim before a federal lawsuit can be filed.

On July 1 the protest site was cleared by police.

A spokesperson with the King County Office of Risk Management Services declined to comment on this week’s filing, since claim is ‘currently under review’.

Melissa Mixon, from Seattle’s Department of Finance and Administrative Services, told the Post that the city was ‘not able to comment on pending claims or litigation.’

‘Our primary goal with any claim is to be thorough and fair with how we review and adjust the claim.’