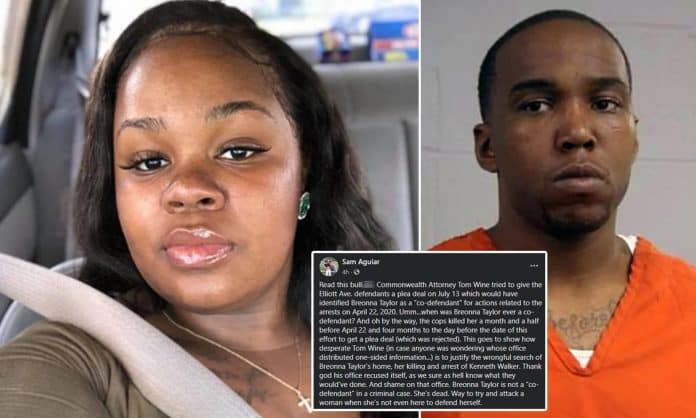 Breonna Taylor’s family attorney says her convicted drug trafficking ex-boyfriend was offered a plea deal to name the slain EMT as a co-defendant in his drug operation months AFTER she was killed, Your Content can reveal.

Jamarcus Glover, who was arrested in a drug raid the same night Taylor was shot dead by police in her Louisville, Kentucky apartment, was offered the plea deal last month.

As part of the deal, Glover would have had to admit that he and co-defendants, including Taylor, trafficked drugs in Louisville, according to court documents.

He refused to take the deal from the Jefferson Commonwealth’s Attorney’s office that could have potentially seen him released on probation for criminal syndication, drug trafficking and gun charges.

Sam Aguiar, the attorney who is representing Taylor’s family in a wrongful death lawsuit, has slammed law enforcement and accused them of going to extreme lengths to try and tarnish the slain woman’s name in the wake of her death.

‘The fact that they would try to even represent that she was a co-defendant in a criminal case more than a month after she died is absolutely disgusting,’ Aguiar told WDRB.