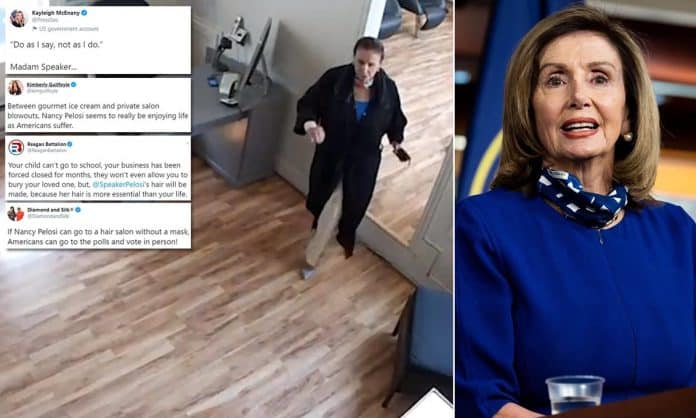 Nancy Pelosi has been branded a hypocrite for breaking COVID rules to get a blowout at a closed San Francisco salon after video surfaced of her walking around without a mask on after pushing for a nationwide face-covering mandate, Your Content has learned.

In the clip taken at eSalon SF in the city Monday afternoon and obtained by Fox News the Democrat is seen with wet hair and her mask around her neck rather than on her face, as she is followed closely behind by a stylist, who is in a face covering.

Salons in San Francisco have been closed since March and were only told they could reopen Tuesday; they can still only offer outside styling. In June Pelosi said a federal mandate on mask wearing was ‘long overdue’.

Pelosi’s spokesperson told Fox News it was the salon’s fault for inviting her to their establishment despite being closed.

“This business offered for the Speaker to come in on Monday and told her they were allowed by the city to have one customer at a time in the business. The Speaker complied with the rules as presented to her by this establishment.”

“Speaker Pelosi has pushed policies that would keep our economy closed and our small businesses shut down. But for herself?” Senate Republicans tweeted. “A salon visit whenever she pleases.”

@ReaganBattalion added: “Your child can’t go to school, your business has been forced closed for months, they won’t even allow you to bury your loved one, but, @SpeakerPelosi’s hair will be made, because her hair is more essential than your life.”

Salon owner Erica Kious rents out chair space to independent stylists, including the one who styled Pelosi.

She told Fox: “It was a slap in the face that she went in, you know, that she feels that she can just go and get her stuff done while no one else can go in, and I can’t work.

“I have been fighting for six months for a business that took me 12 years to build to reopen. I am a single mom, I have two small children, and I have no income.”

Mom of two Kious said she received a message from one of the independent stylists on Sunday night to say the Democrat’s team had been in touch about an appointment.

She added: “We’re supposed to look up to this woman, right? It is just disturbing.

“We have been shut down for so long, not just me, but most of the small businesses and I just can’t – it’s a feeling – a feeling of being deflated, helpless and honestly beaten down.”

Contradicting the images taken inside the salon Pelosi’s spokeman said: “The Speaker always wears a mask and complies with local COVID requirements.”

House Speaker Pelosi has repeatedly berated Donald Trump for not wearing a mask. After the president was pictured not wearing one in May Pelosi said: ‘It’s a vanity thing, I guess, with him.’

When he was pictured in one in July she said: “He’s crossed a bridge. So hopefully by his example, he will change his attitude, which will be helpful in stopping the spread of the coronavirus.”

In July Pelosi announced that all members will be required to wear a mask when voting on the House floor. She said failure to wear would be ‘serious breach of decorum’ for which members could be removed from the chamber.

“It’s a sign of respect for the health, safety and well-being of others present in the chamber and in surrounding areas,” she added.

In April Pelosi had showed off a selection of pricey ice creams on James Corden’s ‘Late Late Show’ while Democrats were refusing to refill the coffers of the Paycheck Protection Program without additional funds for state governments and hospitals.

The Trump campaign latched onto the clip pointing out that Pelosi was “eating $13-a-pint ice cream out of her $24,000 fridge.”