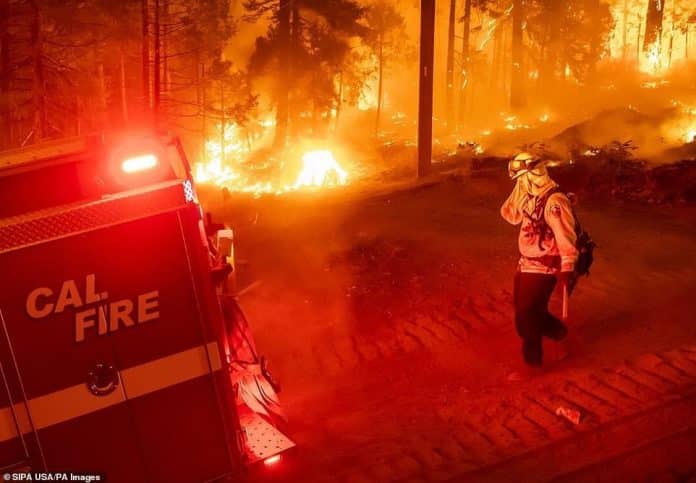 At least one person has died as wildfires trapped hikers in California, decimated an entire town in Washington, burned in Utah and Colorado and lead to more than 100,000 losing power in Oregon during a record heatwave, Your Content has learned.

Military helicopters tried unsuccessfully to rescue around 50 people trapped by wildfires in California on Monday night, but were beaten back by heavy smoke.

The group of hikers and campers remain trapped by Lake Edison, 250 miles east of San Francisco in the Sierra National Forest.

‘Another effort will be made shortly to evacuate the trapped people in Lake Edison and China Peak using night vision.’

The state has 829 people battling to contain the fire, but evacuations have been ordered.

Monday’s frantic rescue attempt came as wildfires blazed across swathes of the western United States on Monday night, destroying homes and devastating forests and grasslands, as record high temperatures and strong winds made the task of fire fighters even more challenging.

An all-time temperature record for Los Angeles County of 121 degrees was set on Sunday, during a historic Labor Day weekend heat wave.

And in Oregon and Idaho, fires close to power lines shut off the electricity, adding to the misery amid the heatwave.

The governor of California, Gavin Newsom, on Sunday night declared a state of emergency as his hard-hit state struggled to beat back the blazes.

Among the most dramatic on Monday was the Creek Fire, which was first sparked on Friday evening and quickly exploded to 135,523 acres – doubling in size again within a day.

The LNU Lightning Complex began on August 17 and has so far burnt 375,209 acres, killing four people. The fire is now 91 per cent contained.

The Creek Fire – which trapped the Lake Edison campers – currently has 0 per cent containment, Cal Fire said, and is being fought by almost 1,000 fire fighters.

The fire is located near the communities of Shaver Lake, Big Creek and Huntington Lake.

Over the weekend the Creek Fire trapped a further 214 people, who had to be rescued by helicopter after the roads were blocked.

Starting on Saturday night lasting into Sunday morning, a Black Hawk helicopter and a large Chinook helicopter flew the 214 people to the National Guard base at the Fresno Yosemite International Airport.

The two aircrafts conducted three lifts from the Mammoth Pool Reservoir along the Fresno/Madera County border, the National Guard said.

Once at the base, emergency medical workers helped triage and take the injured to local hospitals, including Community Regional Medical Center (CRMC).

Twenty of them were to nearby hospitals and six are in CRMC’s burn unit, EMS officials told Action News.

Chris Donnelly, the longtime chief of the volunteer fire department in the nearby town of Huntington Lake, said three propane tanks totaling 11,000 gallons exploded, and an elementary school also caught fire – although it wasn’t clear whether it burned.

The school’s superintendent, Toby Wait, told The Fresno Bee that a church, a library and a historic general store appear to have survived the fire, although Wait’s home burned after his family was evacuated early Saturday.

‘Words cannot even begin to describe the devastation of this community,’ he told the newspaper.

And in Utah, homes were being evacuated on Monday as a wildfire near Mapleton and Springville spread quickly due to strong winds.

It began shortly before 6:30 p.m. on Monday and is currently estimated at 500 acres.

In southern California, the El Dorado wildfire was sparked on Saturday by a gender reveal party, when the pyrotechnical smoke device sent sparks into the bone-dry brush.

The fire has burned 7,386 acres so far, and is only seven per cent contained.

More than 520 firefighters are involved in attempts to stop the spread of the fire, near San Bernardino.

The fire started on Saturday at 10:23am, the authorities said, and 527 people from 10 fire crews are currently trying to halt the fire’s progress.

It spread from the El Dorado Ranch Park north, onto the Yucaipa Ridge. The ridge separates Mountain Home Village and Forest Falls from the City of Yucaipa.

Bennet Milloy, spokesman for the department, told DailyMail.com that the people hosting the party were still on the scene when the firefighters arrived.

‘We know how it started because they were still there,’ he said. ‘That, and the fact that there were surveillance cameras in the park.’

Milloy said that it was a relatively small family gathering, and that the relatives had gathered for a photo opportunity.

The civil costs were deemed ‘suppression costs’ – the charges associated with hundreds of fire fighters, engines, helicopters and planes.

The criminal charges could fall under ‘a variety of charges’, he said – which would be more severe if homes were destroyed. The family could be hit with violations of public resources codes and even arson, under California’s penal code section 452. Arson convictions can result in a sentence of up to nine years.

Milloy continued: ‘They genuinely believed it was an accident.

‘But I think now they understand the gravity of the situation.’

He did not have their names, but said they would be released if charges were pressed.

In Colorado, the capital city, Denver, was cloaked in smoke from the Cameron Peak Fire, which began on August 13 and has so far burned 96,462 acres.

The Cameron Peak Fire is burning strongly through the timbers around Fort Collins, and officials do not expect it to be fully extinguished until Halloween.

Evacuations were being ordered around the town of Blanchard, as a result of the Hunters Fire.

Adding to the misery, more than 60,000 electric customers in Idaho, Oregon and Washington were without power on Monday afternoon, as high winds blew over trees, snapping power lines.

The all-time county record was set at Pierce College in Woodland Hills, a suburb of LA.

North of California, in Washington state, the town of Malden was almost entirely destroyed.

Whitman County Sheriff Brett Myers said that 70-80 per cent of homes in the town of 300 people have gone up in flames.

Larry Frick, who lives in Malden, told KXLY that he spent three hours to save his house amid the flames.

‘It’s gone, brother,’ he texted his sibling after the fire swept through.

‘The entire town is gone. Everything from here to Pine City is gone. The scariest time of my life.’

KREM said that at least nine wildfires were burning throughout the Inland Northwest on Monday, amid dry and windy conditions.