El Chapo Says He Has 23 Children. But They Don’t Even Know It, Yet.
E 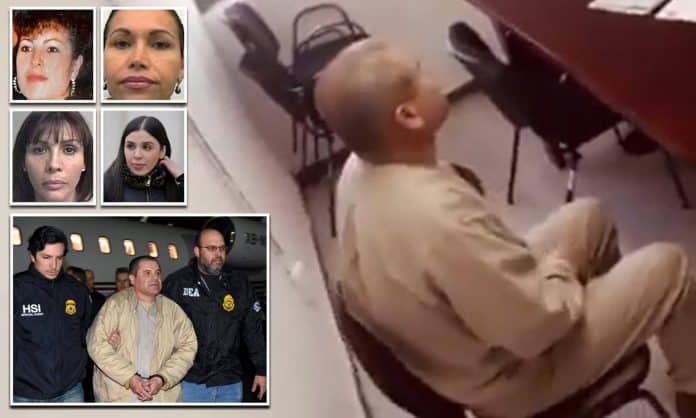 Joaquín ‘El Chapo’ Guzmán admitted the only addiction he ever suffered from was ‘women’ and that he was the father of 23 children, and Your Content can reveal most don’t know their father is the caged Chapo.

The stunning revelations were made during a tell all interview with renown criminologist Mónica Ramírez Cano after Mexican security forces had captured the fugitive co-founder of the Sinaloa Cartel.

Ramírez Cano, who in the past profiled some of Mexico most infamous drug lords, shared a five-second clip of the interview session that was recorded in 2016.

She sat across from El Chapo and asked ‘what have you liked the most Joaquín?’ before the recording came to an abrupt end.

Ramírez Cano, who posted the video on social media Monday, said she asked El Chapo ‘what are you addictions?’ to which the jailed drug lord then replied, ‘none, my only addiction are the women.’

The 63-year-old reportedly has been been married four times.

He first got married in 1977 to Alejandrina María Salazar Hernández, with whom he had four children, including César, Iván Archivaldo, Jesús Alfredo and Alejandrina Giselle. He then married bank clerk bank clerk, Estela Peña, but did not have any children with her.

El Chapo’s third marriage came in the mid-1980s when he tied the knot with Griselda López Pérez, the mother of Édgar, Joaquín Jr., Ovidio and Griselda Guadalupe.

His fourth and final marriage came in 2007 when he said yes to former beauty queen Emma Coronel, who in August 2011 gave birth to the couple’s twin daughters, Maria Joaquina and Emali Guadalupe.

According to Infobae, Ramírez Cano possesses a ‘normal IQ’ although he proved to be utterly astute in carving out a successful yet illicit career as the mastermind behind a criminal syndicate whose influence stretched out across the globe.

‘He is a respectful person, takes great care of manners, cordial, kind, very reserved, but when you establish trust you can talk with him in an extraordinary way, which allows you to know how his mind operates,’ Ramírez Cano said.

During the interview, El Chapo opened up about how he opposed the kidnapping tactics used by many a cartel, which he considered to be the worst crime that could be committed.

Guzmán also said that people became drug users because they simply wanted to do it.

El Chapo, who is serving a life sentence at a supermax penitentiary in Colorado, reportedly made $12.6 billion as the cartel’s chief, money which federal New York prosecutors stressed should be turned.

‘What he has is a very important strategic capacity. He knows who to put in the right place, who to remove and how to move his pieces, like in a chess game.’

An appeal filed on last Friday argues that a judge made rulings allowing a jury to hear faulty evidence at Guzmán’s trial.

It also cites reports that before reaching a guilty verdict, some jurors sought out news accounts about sex abuse allegations against him that were barred from the trial.

‘Chapo Guzmán’s prosecution was marred by rampant excess and overreach, both governmental and judicial – needless resorts if he was really the kingpin extraordinaire his adversaries insisted,’ Guzmán’s lawyers said in the 245-page appeal, which was presented to the Second Circuit Court of Appeals in New York.