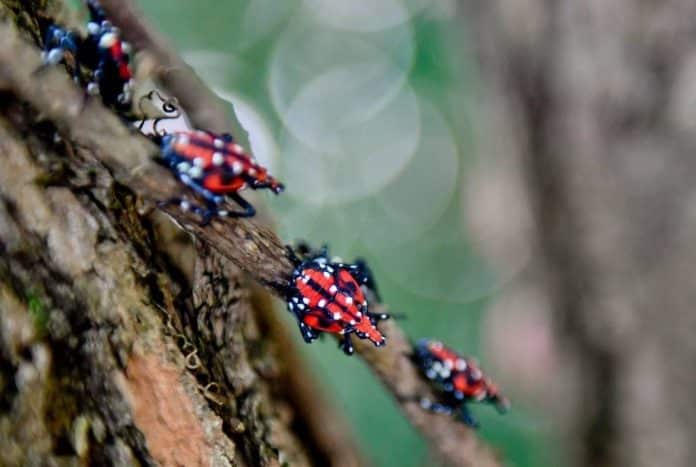 Authorities in Pennsylvania are urging members of the public to take the Spotted Lanternfly into their own hands and squash any and all invasive bugs at once, Your Content has learned.

Following months of hyper-focus on the availability of food, Agriculture Secretary Russell Redding was joined by Penn State College of Agricultural Sciences Dean Richard Roush and Animal and Plant Health Inspection Service (APHIS) Executive Director for Field OperationsCarlos Martinez at Cherry Hill Orchards, where they urged Pennsylvanians to act now against the Spotted Lanternfly for the sake of food security.

“I’ve said time and time again throughout the COVID-19 crisis that we will not accept hunger as our next pandemic,” Redding said. “But we all need to act now to fight a small, but mighty threat to Pennsylvania’s leading agriculture industry and ensure a diverse variety of food is available tomorrow.

“If you see a Spotted Lanternfly, squash it. Report it. Check your car before traveling,” Redding said. “These small acts make all the difference for our farmers working hard to feed Pennsylvania and the nation.”

Native to Asia and first found in Pennsylvania in 2014, the Spotted Lanternfly is capable of decimating entire grape vineyards and damaging fruit orchards, hops, walnuts, hardwoods and decorative trees. These industries contribute billions annually to Pennsylvania’s economy. According to an economic impact study completed earlier this year by Penn State’s College of Agricultural Sciences, this bad bug could cost Pennsylvania up to $324 million annually in economic impact with a loss of more than 2,800 jobs if not contained.

In addition to endangering agriculture, the Spotted Lanternfly threatens our ability to enjoy the outdoors during spring and summer months. They’re known to swarm in the air, cover trees, and coat decks and play equipment with their excrement, known as honeydew. Honeydew, along with sap from weeping plant wounds that result from feeding of Spotted Lanternfly, can attract bees and other insects and also stimulate the growth of mold and other fungi.

“The key to finding strategies for sustainable, long-term management of the Spotted Lanternfly lies in understanding its biology and behavior, finding its weaknesses and exploiting them,” noted Rick Roush, dean of Penn State’s College of Agricultural Sciences. “To that end, Penn State is working with US Department of Agriculture and Pennsylvania Department of Agriculture scientists and other institutions to develop biological, chemical and physical controls, and other methods to manage the pest around forested areas, homes, parks, buildings, nurseries, vineyards and fruit farms.”

Projects include studies on disrupting the lanternfly female reproductive cycle; testing organic control methods such as a fungal-based spray and natural insect predators; investigations of the pest’s flight behavior, where it might travel and the conditions it needs to flourish; and research on its feeding preferences, including its penchant for tree of heaven and at-risk specialty crops such as grapes. Among the most novel approaches is taking advantage of the Spotted Lanternfly’s attraction to poles and other tall objects to design traps and barriers.

“Since 2014, the Spotted Lanternfly has been slowly, but steadily, eating away at the commonwealth’s economy,” Roush said. “As this destructive pest continues to put our state’s agricultural crops and recreational areas at risk, it is imperative that research and education efforts be increased and supported. Our efforts to date have yielded valuable insights, and we are sharing that information with growers, citizens and key stakeholders.”

USDA’s Animal and Plant Health Inspection Service (APHIS) is working with the Pennsylvania Department of Agriculture (PDA), universities, private industry, and other government agencies to advance effective strategies for battling the spotted lanternfly.

“We are developing new tools for long-term population control and methods to reduce impacts of this pest. This summer we deployed an improved trap for detecting spotted lanternfly populations,” said Carlos Martinez, APHIS Executive Director of Field Operations. “We will continue to work with PDA to detect and treat spotted lanternfly populations and conduct public outreach. We are committed to supporting Pennsylvania’s fight against this invasive pest.”

The Pennsylvania Department of Agriculture and Penn State College of Agricultural Sciences have worked collaboratively with the USDA over the past several years to educate the public and slow the spread of Spotted Lanternfly in Pennsylvania. With Penn State leading research and education efforts, Pennsylvania Department of Agriculture and USDA teams of inspectors follow up on reports of Spotted Lanternfly in Pennsylvania’s newly quarantined counties and counties outside of the quarantine zone, treating confirmed sightings as appropriate. These teams also conduct proactive surveys for the invasive insect to suppress new populations.

In early March, Pennsylvania added 12 counties to the area quarantined for Spotted Lanternfly. The 14 counties previously quarantined had widespread insect populations. The new 12 counties have isolated infestations. A detailed map of quarantined counties serves to illustrate how the insect travels – by hitchhiking with people travelling from infested areas to new areas.

It is crucial for anyone travelling in and outside the quarantined counties to be vigilant and look before they leave to prevent transporting insects to a new area. Pennsylvanians – even though inside the quarantine zone – should also report insects online or via phone at 1-888-422-3359. Spotted Lanternfly reports from the public provide valuable data for researching insect populations and slowing its spread.

For more about the Spotted Lanternfly visit agriculture.pa.gov/spottedlanternfly or the Penn State Extension website.