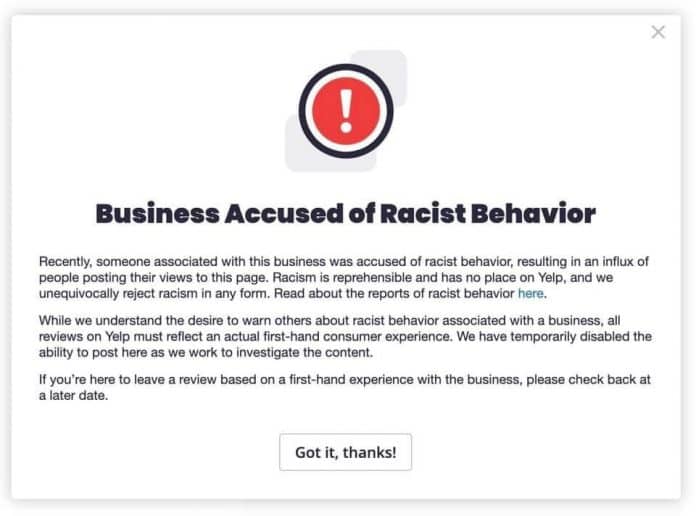 In an odd turn of events — Yelp has announced that they will place a red notice on establishments accused of being ‘racist’ by outraged customers without a proper system to vet the tip, Your Content has learned.

“So basically they’re now allowing BLM and ANTIFA to do virtual looting.

“In the future, they’ll use the Yelp list to go and attack these businesses. Yelp is now aiding and abetting ANTIFA/BLM domestic terrorism.”

“Chris Coons can stop this, but he won’t.”

As Your Content readers know, Antifa has been declared to be a domestic terrorist organization by the U.S. Department of Justice.

“With the rioting that is occurring in many of our cities around the country, the voices of peaceful and legitimate protests have been hijacked by violent radical elements,” United States Attorney General Bill Barr said on May 31.

“Groups of outside radicals and agitators are exploiting the situation to pursue their own separate, violent, and extremist agenda.”

“It is time to stop watching the violence and to confront and stop it. The continued violence and destruction of property endangers the lives and livelihoods of others, and interferes with the rights of peaceful protestors, as well as all other citizens.” the attorney general continued.

Barr designated the group as a ‘terrorist organization’ in an official statement issued by the Department of Justice.

“To identify criminal organizers and instigators, and to coordinate federal resources with our state and local partners, federal law enforcement is using our existing network of 56 regional FBI Joint Terrorism Task Forces.