At Least 30 Cops Injured, 91 People Arrested for Philadelphia Riots Over Death of Knife Wielding Man
A 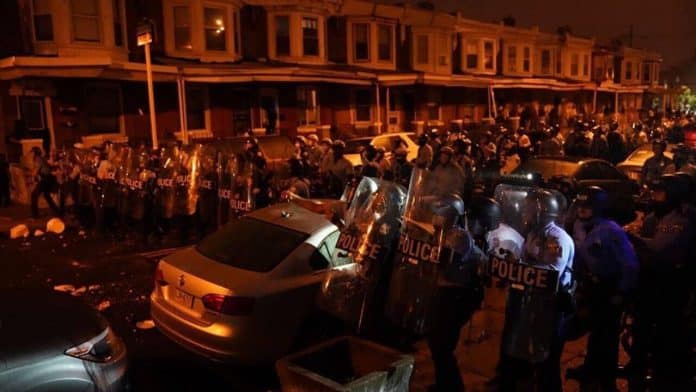 At least 91 people were arrested over the course of the night, Philadelphia Police Commissioner Danielle Outlaw said during a Tuesday afternoon press conference.

As Your Content previously reported, a 56-year-old sergeant was hospitalized in stable condition with a broken leg and other injuries after she “was intentionally run over by an individual driving a pick-up truck.”

The other injured officers were treated and released, Outlaw said.

Video obtained by Your Content shows a pick up truck ramming through the crowd striking at-least one officer wearing a white shirt who was seen on the ground … bystanders fled the scene.

The turmoil comes after police shot and killed a knife-wielding manic who lunged at them Monday.

It happened around 3:50 p.m. when officers responded to a domestic call along the 6100 block of Locust Street, according to the Inquirer.

Sgt. Eric Gripp, a spokesperson with the Philadelphia Police Department, says officers confronted a man with a knife at the scene.

Gripps say the man was shot multiple times by two officers after he didn’t adhere to calls to drop the weapon. He was later pronounced dead.

Both then fired several shots at the man and he collapsed in the street. A woman ran up to the victim and began screaming.

Several bystanders then walk up to the man who was shot.

The officers ordered the man to drop the knife before he allegedly charged at them. The officers were wearing body cameras, a police spokesperson said.

Witnesses told the newspaper that Wallace was at least 10 feet away from the officers when they opened fire. He was walking toward them and they were backing away at the time, the news report said.

Philadelphia District Attorney Larry Krasner said his office’s Special Investigation Unit will be part of the investigation into the shooting.

“The DAO Special Investigation Unit responded to today’s fatal shooting of a civilian by police shortly after it occurred, and has been on scene with other DAO personnel since that time investigating, as we do jointly with the PPD Officer-Involved Shooting Investigation Unit, in shootings and fatalities by other means involving police,” he said in a statement.

“Residents have my assurance that those questions will be fully addressed by the investigation,” she said. “While at the scene this evening, I heard and felt the anger of the community. Everyone involved will forever be impacted.”