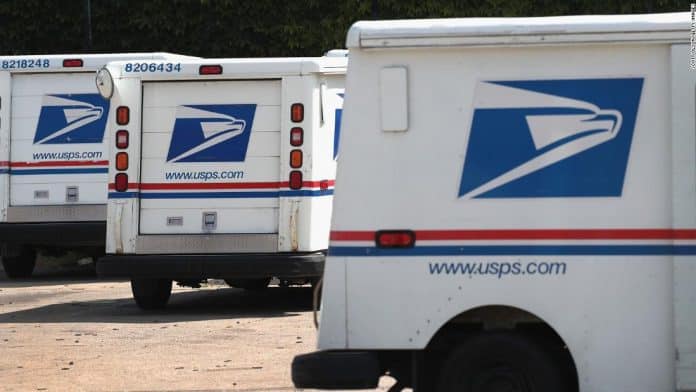 The U.S. Postal Service on Tuesday said it could not meet a federal judge’s order to sweep processing centers for undelivered mail-in ballots, arguing that doing so would disrupt its Election Day operations.

The order came after weeks of bruising court decisions for an agency that has become heavily politicized under its new leader, Postmaster General Louis DeJoy.

DeJoy, a major GOP donor, made a series of controversial policy changes in the summer that delayed mail nationwide, fueling worry about the service’s ability to handle the unprecedented crush of mail-in ballots. At the same time, President Donald Trump has baselessly attacked mail voting as fraudulent throughout his campaign.

In its response to the judge’s order, the Postal Service said it had already conducted rounds of morning checks at all its processing hubs. Further, the agency said has been performing daily reviews of all 220 facilities handling election mail and planned another sweep hours before polling places closed Tuesday.

Much of Sullivan’s order hinged on postal data showing roughly 300,000 mail-in ballots in several states had not received scans showing they had been delivered.

The agency has disputed the accuracy of the figure, saying it has pushed to ensure same-day local delivery of ballots by circumventing certain processing steps entirely, leaving them without the final delivery scan.

“Defendants are working as expeditiously as possible to comply with this Court’s orders while recognizing physical and operational limitations and the need to avoid disrupting key activities on Election Day,” Justice Department lawyers representing the Postal Service wrote.
The judge accepted the agency’s response but set a Wednesday hearing “to discuss the apparent lack of compliance with the court’s order.”

Associated Press coverage of voting rights receives support in part from Carnegie Corporation of New York. The AP is solely responsible for this content.