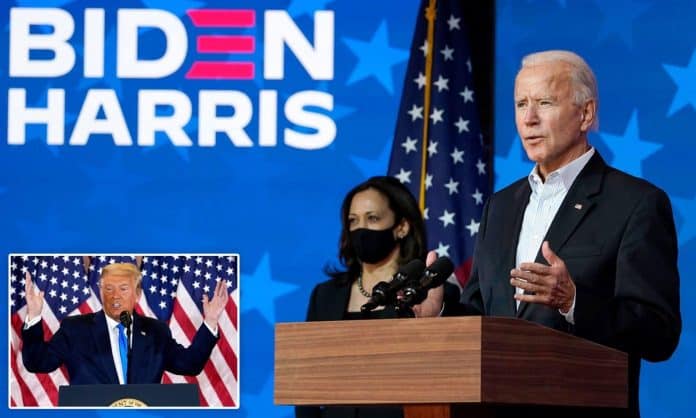 Secret Service agents have been sent to Delaware to ramp up protection for Joe Biden as he edges closer to a win and plans to make ‘big announcement’ later today, Your Content has learned.

Although the Secret Service does not publicly discuss its security arrangements for the president or the candidates it protects, dozens of agents are currently providing security for the Biden campaign at the Chase Center at the Riverfront convention center in Wilmington.

Biden’s additional security would begin on Friday, however it is not the full protective detail that would normally accompany a president-elect, but it is more elevated than his current setup.

In the past, the winner of election night would normally receive increased security protection that same night, however the delays experienced this year means new security details have not yet been assigned.

If Biden is finally declared to be the winner but Trump still refuses to concede, the Secret Service team may be told to wait until mid-December when the electoral college meets before treating Biden as the president-elect according to the Washington Post.

Either way, the Secret Service would be likely to ramp up protection on Biden well before that date, a former agent said to the Post.

In 2000, during the presidential race between Republican George Bush and then-Vice President Al Gore, for 36 days there was no official president-elect.

The two sides were involved in a recount over votes in Florida before the Supreme Court finally made a decision.

Throughout that period, the Secret Service decided to keep things the same and provided vice-presidential protective detail with Al Gore all the while continuing to protect George Bush as a then-candidate.

Earlier on Thursday, in an address in his hometown of Wilmington, Delaware, Biden asked Americans to be patient and calm as they waited for the final ballots in the presidential race to be counted – amid mounting anxiety over the long wait for results, and concern about public order.

‘Democracy is sometimes messy. It sometimes requires a little patience as well,’ the former vice president said from the stage of Wilmington’s Queen theater late on Thursday afternoon.

‘So I ask everyone to stay calm, all people to stay calm. The process is working. The count is being completed and we’ll know very soon.’

In the same brief statement, the Democratic nominee assured supporters that he and his running mate, Sen. Kamala Harris, would come out on top.