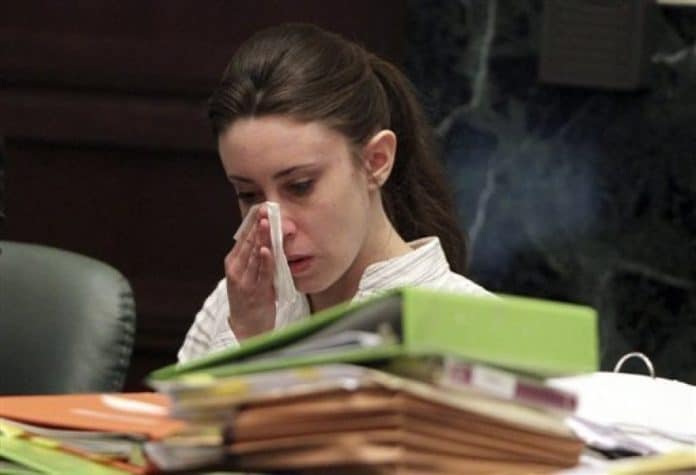 Though scamp scarred Casey Anthony has high hopes of becoming a private investigator—Florida law prohibits the felonious ruffian from obtaining the required licensing to achieve her goal, Your Content has learned.

According to state law, the Florida Department of Agriculture and Consumer Services Division of Licensing ‘will deny’ an applicant with a felony conviction—but that doesn’t apply to charges where ‘ten years have passed’

Anthony scored a felony in 2010 after stealing hundreds of dollars from a friend, Amy Huizenga, in July 2008.

Investigators have said Anthony used Huizenga’s checks to buy more than $400 worth of clothes and groceries at area Target and Winn-Dixie stores.

“I’m sorry for what I did,” the monster mom said. “I sincerely apologize to Amy. I wish I would have been a better friend.”

But the board could ‘very likely’ deny Anthony’s application due to her ‘history of being arrested.’

At the tail end of 2020, news surfaced claiming the onetime accused child-killer seemed to have launched a private investigation firm.

The limited liability company, Case Research & Consulting Services, has an effective date of Jan. 1, according to state records. The address listed for the company belongs to Patrick McKenna, reports 10 Tampa Bay, who was first to break the story.

Anthony, who was acquitted in 2008 of the murder of her two-year-old daughter Caylee after a highly publicized trial, filed the paperwork with the Florida Division of Corporations in mid-December.

Your Content exclusively reported on Dec. 14 that Anthony—dubbed the most hated mom in America—tested positive for the coronavirus after bar hopping in West Palm Beach the past two weekends.

The twice-divorced PI was lead investigator on Anthony’s defense team and is even more famous for unearthing the racist police tape that wrecked the prosecution of OJ Simpson.

McKenna has never commented on the nature of their relationship with Anthony but documents list his $1.25 million, two-bed home as the headquarters of Case Research & Consulting Services.

Anthony is registered as the business’s sole agent and the venture is set to start trading on January 1, according to the papers filed with the Florida Division of Corporations on December 14.

The monster mom was seen at multiple anti-Trump rallies—including one incident in Palm Beach where an outraged Anthony marched on Flagler Drive in West Palm Beach in Feb. 2017 to make a showing of dismay with the new president’s actions.

Anthony was charged with first-degree murder for the 2008 disappearance of Caylee, who was missing for 31 days before Anthony’s mother, Cindy, reported her missing. After a massive search for the missing toddler, the girl’s remains were found in a wooded lot less than one-third of a mile from the Anthony family home.