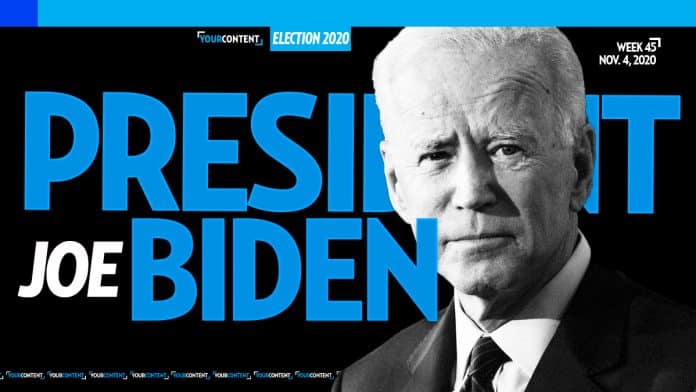 Today, President-elect Biden announced his slate for new Democratic National Committee officer positions, including the announcement of Jaime Harrison for DNC Chair, Your Content is first to reveal.

“This group of individuals represent the very best of the Democratic Party,” said President-elect Joe Biden. “Their stories and long histories of activism and work reflects our party’s values and the diversity that make us so strong. As our country faces multiple crises from systemic racism to the COVID-19 pandemic, working families in America need and deserve real leadership. We need to elect Democrats across our country and up and down the ballot. To do that is going to take tireless leadership, committed to strengthening Democratic infrastructure across our states. These leaders are battle-tested and ready for this immense task. I know they will get the job done.”

“I’m thrilled by this slate of officers, all battle-tested, brilliant leaders that build on our party’s successes, reflect the great diversity of the Party, and will work to expand our successes up and down the ballot,”said incoming White House Deputy Chief of Staff Jen O’Malley Dillon. “These leaders know what we need to do to ensure the party is strong, inclusive, and continues to expand our coalition of support across the states — because that’s how we’ll continue winning races and electing leaders at every level who will build America back better. The stakes couldn’t be higher for the American people. As our country continues to grapple with dual public health and economic crises, Democratic leadership is needed in all levels of our government. I am more than confident that these officers, with Jaime Harrison at the helm, will lead a party that will do just that.”

This announcement marks the first step in continuing the strong work of the DNC. At the DNC’s Summer Meeting, President-elect Biden’s leadership team will continue this work through the nomination of their slate for DNC-At-Large members, including the most labor representation in recent history.

Jaime Harrison
Biden-Harris Nominee for Chair
As the son of a single teenage mom, Jaime Harrison was raised by his grandparents in Orangeburg, South Carolina, Jaime knows what it’s like for a family to have to choose between paying the electric bill and putting food on the table, and what it feels like to go to sleep in a home with no heat, because the power was shut off.

But thanks to a good public school education, the love of his family, and the support of his community, Jaime was able to earn a scholarship to Yale University and attend Georgetown Law. After college, Jaime came back home to Orangeburg to teach at his old high school, then worked to help empower disadvantaged kids to attend college. Jaime also served as an aide to legendary South Carolina Congressman Jim Clyburn. In 2013, Jaime was elected the first African American chair of the South Carolina Democratic Party, a position he held until 2017, when he was appointed by DNC Chair Tom Perez as an Associate Chair of the DNC. In 2020, Jaime ran for the U.S. Senate from South Carolina, building a national grassroots movement and setting a fundraising record for the most raised by a Senate candidate. Jaime and his wife Marie live in Columbia, South Carolina, where they raise their two young sons.

Mayor Keisha Lance Bottoms
Biden-Harris Nominee for DNC Vice Chair, Civic Engagement and Voter Protection
A daughter of Atlanta, Mayor Bottoms, the 60th Mayor of Atlanta, is committed to realizing her vision of One Atlanta — an affordable, resilient and equitable Atlanta — which stands as a model city for both commerce and compassion. A lifelong public servant, Mayor Bottoms is the only Mayor in Atlanta’s history to have served in all three branches of government, serving as a judge and City Councilmember before being sworn in as Mayor. Leading with a progressive agenda focused on equity and affordable housing, Mayor Bottoms serves as Chair of the Community Development and Housing Committee and the Census Task Force for the United States Conference of Mayors. She also served as chair of the DNC Platform Drafting Committee and a delegate to the Convention.

Governor Gretchen Whitmer
Biden-Harris Nominee for DNC Vice Chair
Governor Gretchen Whitmer — or “that woman from Michigan,” as President Trump called her — is a lifelong Michigander who has devoted her life to building a stronger Michigan for everyone. Governor Whitmer has been a trailblazer throughout her career in public service. She was elected to the Michigan House of Representatives in 2000 and elected to the Michigan Senate in 2006, where she became the first woman to serve as the Senate Democratic Leader. During the 2018 gubernatorial race, Governor Whitmer won all 83 counties in the primary election, and won the general election with the highest number of votes that any governor has received in Michigan’s history.

Senator Tammy Duckworth
Biden-Harris Nominee for DNC Vice Chair
U.S. Senator Tammy Duckworth is an Iraq War Veteran, Purple Heart recipient and former Assistant Secretary of the U.S. Department of Veterans Affairs who was among the first handful of Army women to fly combat missions during Operation Iraqi Freedom. Duckworth served in the Reserve Forces for 23 years before retiring at the rank of Lieutenant Colonel in 2014. She was elected to the U.S. Senate in 2016 after representing Illinois’s Eighth Congressional District in the U.S. House of Representatives for two terms.

In the U.S. Senate, Duckworth advocates for practical, common-sense solutions needed to move her state and our country forward like rebuilding our crumbling infrastructure, protecting Illinoisans from lead poisoning, growing manufacturing jobs while supporting minority-owned small businesses, investing in communities that have been ignored for too long and making college more affordable for all Americans.

Representative Filemon Vela Jr.
Biden-Harris Nominee for DNC Vice Chair
Congressman Filemon Vela is from the border town of Brownsville, TX, where he has seen first-hand how the destructive policies from the Trump administration have hurt the Latino community. Vela has spent his career fighting for immigrant rights, servicemembers, and underserved communities. He has served on the House Agriculture Committee, as well as the House Armed Services Committee, where he has championed policies for servicemembers and their families to access housing, health care and basic living necessities as they serve our nation. Vela has been an outspoken opponent to the construction of the border wall along the Texas-Mexico border, which goes through his district, and has fought to ensure access to high-paying jobs in the region and for the Latino community.

Jason Rae
DNC Secretary, Biden-Harris Nominee for DNC Secretary
Jason has been a lifelong Democrat, attending county party meetings in rural Barron County, Wisconsin, on a bicycle before he could even drive. He was first elected to the DNC in 2004 when he was just 17 years old, the youngest person ever elected, and was re-elected three times. In February 2017, he was elected Secretary of the Democratic National Committee. Jason serves as a member of the DNC Executive and Rules & Bylaws Committee. He was also the Chair of the DNC Youth Council from 2007 to 2017. Jason founded and currently serves as President & CEO for the Wisconsin LGBT Chamber of Commerce, an award-winning organization with more than 600 businesses members. He is also a partner at the Milwaukee-based public affairs firm Nation Consulting. Rae lives in Glendale, Wisconsin, a suburb of Milwaukee, with his husband, Phillip.

Virginia McGregor
Biden-Harris Nominee for DNC Treasurer
A native of Scranton, Pennsylvania, Virginia McGregor serves as Deputy National Finance Chair of the DNC and National Co-Chair of the DNC’s Women’s Leadership Forum. She is Chair of the Geisinger Family Committee and serves on the Patient Experience, Academic Affairs and Quality committee of the board. In addition, Virginia also serves as chair of the Geisinger Commonwealth School of Medicine board. Prior to her appointment, she served as chair of the CMCHS Board of Directors and previously served on the North Penn Bank Board of Directors, St. Joseph’s Center Foundation Board of Directors, and The Boys and Girls Club of Scranton Board of Directors. Virginia graduated from Holy Cross College with a B.A. in history and also attended the Harvard Kennedy School of Government, Executive Education Program. She currently serves on the board of McGregor Industries, a family-owned business that is a manufacturer of miscellaneous and structural steel products for the construction industry.

Chris has been extremely involved in charitable activities in the community, including serving on the Florida International University Foundation Board, Vice Chairman of the Urban League of Greater Miami, and is involved with numerous other organizations.