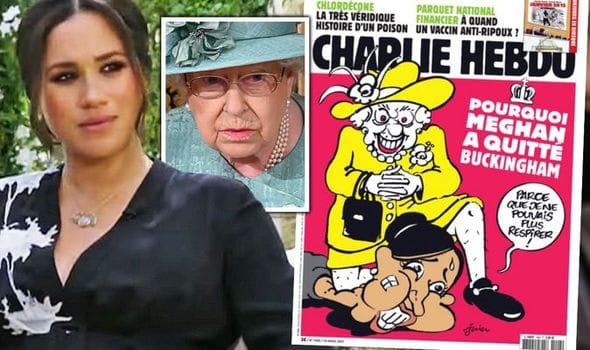 An outlandish Frenchman is under fire after the cover of Charlie Hebdo Magazine showcased Queen Elizabeth—as Derek Chauvin—kneeling on a dead Megan Markle’s neck, who plays George Floyd, Your Content has learned.

The French released a new edition of its weekly publication—and a crudely drawn cartoon version of Queen Elizabeth kneeling down on the Megan Markle’s neck is featured on the cover.

The caption reads: “POURQUOI MEGHAN A QUITTE BUCKINGHAM,” which translates to “Why Meghan left Buckingham.”

There’s a quote bubble coming from Meghan as well in the drawing, which roughly comes out to, “because I couldn’t breathe anymore.”

Just this week The Minneapolis City Council voted unanimously to pay an unprecedented $27 million to settle a civil lawsuit from George Floyd’s family over his death in police custody.

The news of the settlement was announced as jury selection continued in the murder trial of Chauvin, who killed Floyd by kneeling on his neck for nine minutes last summer.’

And while some have simply expressed their outrage at the Charlie Hebdo cover, a human and civil rights activist @_SJPeace is calling for the magazine to be removed.

‘A French magazine is laughing about Floyd’s death…and Meghan Markle,’ he said.

‘This magazine is notorious for being racist and offensive and gaslighting people of color. This magazine needs to be removed!’