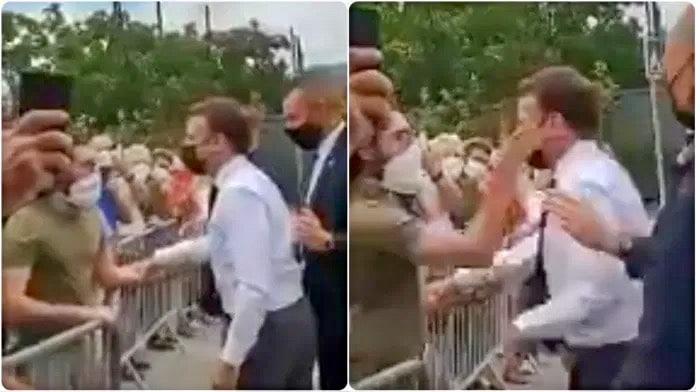 In a video circulating on social media, Mr Macron is seen walking up to a barrier on a trip to Tain-l’Hermitage outside the city of Valence.

A man in a green T-shirt slaps Mr Macron in the face before officers quickly move in. The president, meanwhile, is pulled away.

In the footage filmed at midday by a witness, Mr. Macron is seen approaching a small crowd of people in Tain-l’Hermitage, a town in the Drôme region of France that he was visiting to speak with members of the food and restaurant industry ahead of a new loosening of Covid 19-related restrictions this week.

“Democracy is debate, it is dialogue, it is the confrontation of ideas, the expression of legitimate disagreements,” Mr. Castex told France’s lower house of Parliament. “But it can never be violence or verbal assault, let alone physical assault.”

“I am Emmanuel Macron’s first opponent, but he is the president,” Ms. Le Pen said at a news conference in eastern France. “One can fight him politically, but one cannot be violent in any way against him.”