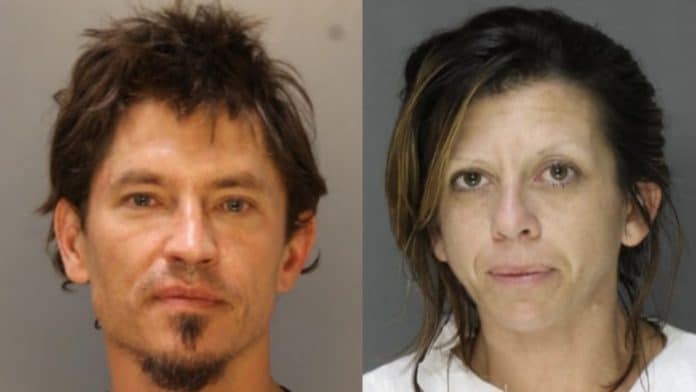 Radnor Township Police Department announced the arrest of William Quirk, 45, of Broomall, PA, and Nicole DiPietro, 39, of Springfield, PA for a residential burglary in the Wayne section of the township on Sun. Aug. 15.

According to a press release by Radnor Township Police, their department was dispatched to the 200 block of Matsonford Road for a burglary discovered. The victim reported returning after one week and noticed the home to have been ransacked.

Upon arrival, RTPD Canine Officer Ryan Collins and K9 Urrsi were deployed inside the home. Officers located Heather DiPietro hiding inside the residence. She was taken into custody without incident.

Quirk escaped from a second story window and fled on foot. With the assistance of the Lower Merion Police Department and Haverford Township Police Department, one additional Canine Team began to track Quirk. Officers located Quirk inside a heavily wooded area where he, again, fled on foot. Utilizing LMPD’s aerial drone, equipped with thermal imaging technology, the Drone Operator communicated with Officers the terrain of the area and provided directional assistance. Quirk was apprehended by LMPD K9 Edo nearby.

He sustained minor injuries and was treated at Bryn Mawr Hospital. While processing the scene, Investigators found information that the two had been occupying the home without permission and engaged in criminal behavior inside the home for nearly one-week.

“We are grateful for the assistance of both outside agencies during this incident. This team effort brought immediate closure to those victimized by two truly brazen suspects” said Superintendent of Police Christopher B. Flanagan. “We are fortunate to have the Canine Team and area resources, who when called upon, were spot on. The usage of the drone is a 21st Century tool that provides a new vantage point for law enforcement during a high risk situation such as this” Flanagan commented.

Quirk and DiPietro were arraigned before the Honorable Judge Wilden Davis. Both were unable to post bail and remanded to George W. Hill Correctional Facility.