A Boeing KC-135RT Stratotanker owned by the U.S. Air Force departed Kandahar Airport just under an hour ago. 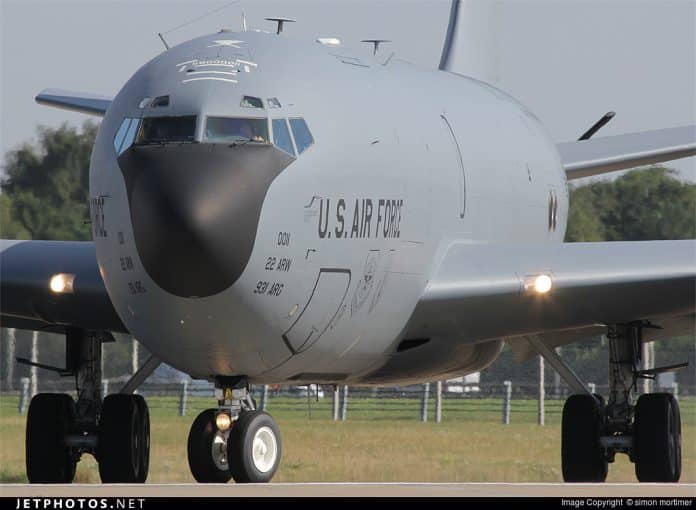 A Boeing KC-135RT Stratotanker owned by the U.S. Air Force departed Kandahar Airport just under an hour ago, flight radar maps reviewed by Your Content indicates.

But the move appears to be life-or-death after a series of bizarre events—including three stowaways who fell hundreds of feet to their deaths after climbing onto the fuselage of a departing US Air Force C-17 plane as it took off from at Hamid Karzai International Airport, while hundreds of other desperate people tried to cling onto planes as they taxied down the runway.

Senior US military officials said troops shot and killed two armed Afghans among those trying to get onto the jet while US citizens were evacuated in two separate incidents. A further three people were caught under plane wheels amid scenes of anarchy as the country slips into Taliban control.

The U.S. defeat and chaotic retreat in Afghanistan was dubbed a ‘political disaster’ putting into question the president’s ‘failure to orchestrate an urgent and orderly exit’.

A New York Post editorial even said his claims that he ‘inherited’ Trump’s withdrawal plans were a ‘lie’ and branded the crisis situation ‘as humiliating an end as the rooftop scramble in Saigon in 1975’.

The head of German Chancellor Angela Merkel’s party, Armin Laschet, called it the ‘biggest NATO debacle’ since the founding of the alliance, while MPs accused Prime Minister Boris Johnson of a ‘shameful’ silence and questioned if he did enough to discourage President Biden from withdrawing US troops.

United Nations Secretary-General Antonio Guterres said he was ‘concerned’ by accounts of human rights violations against the women and girls of Afghanistan who fear a return to the darkest days’ of the 1990s when the Taliban came to power after the Civil War and imposed a brutal theocracy.

Afghanistan’s representative to the UN Security Ghulam Isaczai told a meeting of the five powers – the US, Britain, China, Russia and France – on Monday that “there are already reports of target killings and looting in the city.”

“Kabul residents are reported that the Taliban have already started house-to-house searches in some neighborhoods, registering names and looking for people in their target list,” he added.

Afghan President Ashraf Ghani has also come under fire from critics and political rivals for hightailing out of the country as the Taliban stormed the Presidential Palace last night. The Russian Embassy claimed that he had fled in a helicopter full of cash. His whereabouts remain unknown.

On Tuesday, Australia’s defense minister said that their rescue mission will not go ahead until chaos at Kabul airport subsides as people desperately try to escape the Taliban.

Australian air force troops will base themselves in the United Arab Emirates while waiting for the Afghan capital to become safer.

Peter Dutton, the defense minister, said the tragic scenes made it incredibly difficult for Australia’s mission until US forces secure the airport.

“For Australia, we won’t be landing aircraft into the airport until it’s safe to do so,” he told Sky News on Tuesday.

There are more than 130 Australians working for the United Nations, non-government organizations and elsewhere still in Afghanistan which is now under Taliban control.

A U.S. State Department spokesperson said that all embassy personnel had been transferred to Kabul airport, but it remained unclear on Monday how many had been successfully extracted from the country.

An estimated 10,000 Americans were at the airport on Monday night, said Fox News’ Sean Hannity.

It was also unclear how many Afghan nationals are currently at the airport seeking evacuation, but insiders say that at most, only one or two thousand translators and other civilians are likely to be airlifted out.