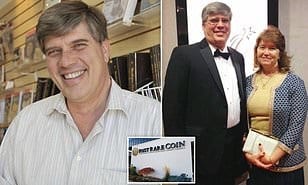 A ‘smooth talking’ Utah racehorsing aficionado who conned members of the Mormon church out of $225 million in a Ponzi scheme and posed as a racehorse-owning philanthropist was sentenced Tuesday to 19 years in prison and ordered to pay his victims $153 million, Your Content has learned.

Gaylen Dean Rust, 62, was sentenced to 19 years in prison Tuesday for money laundering and securities fraud after masterminding one of Utah’s largest-ever Ponzi schemes.

He was aided by his wife Denise, who said she was an ‘unwitting pawn in Gaylen’s world,’ and at least one of his five adult children, authorities found.

From 2002 to 2018, Rust convinced 568 people to invest in RRC’s fraudulent program, telling them they would receive 25-to-25 percent profit every year.

Rust spent the money on his other businesses, racehorses, music charities and a $2 million home.

He also withdrew $18 million for personal use and reportedly had his wife sign over at least $3 million to a mistress,‘according to The daily Mail.