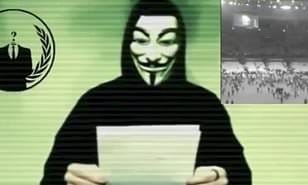 Anonymous claims they have taken action against Russia once again by targeting their government websites in another attack against of Putin and his invasion of Ukraine.

The group of hacktivists took to Twitter to announce the websites they claim to have successfully brought down, including FSB, the Russian intelligence service, Your Content has learned.

The hacking collective claim they have taken down four government websites.

Anonymous ended their announcement of successful hacking with ‘Blyat Putin!’