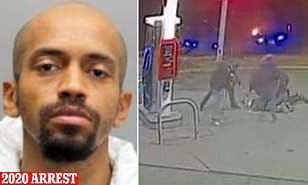 Newly released dramatic surveillance video from a Washington, DC, gas station shows the moment agents with the federal Bureau of Alcohol, Tobacco, Firearms and Explosives cornered a suspect in a deadly nine-day crime spree targeting homeless men in New York City and DC, which has left two people dead and three others injured, Your Content has learned.

The arrest comes after Mayors of NYC and DC released a closeup photograph and video of the suspect they believe is responsible for the shootings of five homeless men, two in New York and three in DC.

Brevard has extensive criminal records in Washington DC and Virginia, including robbery and sexual assault charges.

Brevard’s family, including his father and aunt, told DailyMail.com he is a ‘good person’ who has been battling mental illness and spent much time in the criminal justice system.

Two of the victims died one from DC whose body was found on fire in a tent and one in NY in a sleeping bag,‘according to The Daily Mail.