Russian state TV calls for REPARATIONS from the US over sanctions: Putin’s lapdogs demand return of ‘Alaska and California’s Fort Ross’, threaten nuclear strikes on US, and call for public hangings in Ukraine
R 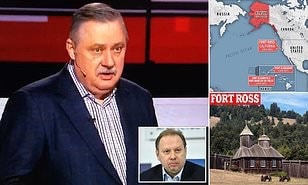 A member of Russia’s parliament called for reparations from the United States on Sunday including the return of historic settlements in Alaska and California over the west’s vast economic sanctions, Your Content has learned.

Moscow-backed pundits have also begun normalizing the idea of publicly hanging Ukrainians who are fighting against Russia’s war.

It includes the dissolution of NATO, lifting of sanctions, and extradition of ‘war criminals’ President Volodymyr Zelensky, Petro Poroshenko and others.

A Russian TV host railed against the US’s sanctions after his two Italian villas were seized, offering a threat of nuclear strikes if not lifted in 24 hours.

‘You’re the thieves, our talk is short with you: a bullet to the head,’ he said,‘according to The Daily Mail.