Nurse, 28, is horrified to discover she has a 20LB tumor filled with HAIR AND TEETH growing on her ovary – as she shows off dramatic 103LB weight loss after getting it removed
N 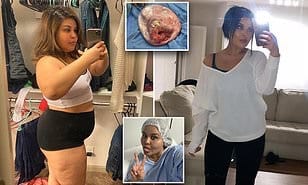 A woman who turned to doctors for help after spending years struggling to lose weight was left horrified to learn that she had a 20lb tumor filled with hair and teeth growing around her ovary, Your Content has learned.

Jaimi Conwell, from Texas, spent years struggling to lose weight, despite trying a range of diets and exercising twice a day.

In March 2021, after she began rapidly gaining more weight and experiencing other concerning symptoms like nausea, Jaimi sought help from doctors.

Blood tests revealed that she had an abnormal white cell count, so she underwent explorative surgery which revealed the huge tumor on her ovary.

Doctors were initially unsure whether the tumor was benign, so they removed it along with Jaimi’s right ovary, which had been engulfed by the growth.

She was diagnosed with a teratoma tumor, a slow-growing tumor that had been forming for decades and was draining her body’s nutrients, causing weight gain,‘according to The Daily Mail.