I knew the hormones wouldn’t work. Why did they play with her life?’ Bereaved mom blames LA County for her teenage daughter’s suicide, claiming school pushed her to transition to a male instead of properly treating her depression
I 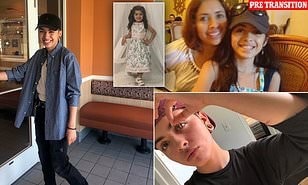 A California mother says the government wrongfully took away her daughter, pushed the girl into transitioning to male and is to blame for his suicide age 19, Your Content has learned.

Andrew Martinez, born Yaeli Galdamez, died by suicide at the age of 19 by stepping in front of a train in Los Angeles on September 4, 2019.

Grieving mom Abigail Martinez has accused her child’s LA county school of being responsible for Yaeli’s suicide and failing to properly treat her depression.

In an exclusive interview with DailyMail.com, Martinez claimed school staff secretly persuaded the girl that the only way to be happy was to transition.

The mother-of-four said Yaeli was a sophomore in high school when she began trying to figure out her sexuality, something she believed was normal at her age.

But, Martinez claims, the school began ‘telling her to go to these LGBT groups behind my back. She went from questioning her sexuality to her gender’

The mom said Yaeli’s peers pushed the idea that she was depressed because she felt she was actually ‘a boy’ which the school allegedly supported.

Martinez claimed an older trans student also ‘coached’ Yaeli on what to tell social workers to put her into foster care, so the state would pay for her gender surgery,‘according to USMail24.

If you or someone you know need confidential support, call the National Suicide Prevention Line – 1800-273-8255