Cops arrest man, 35, for murder of Bronx mom-of-two, 37, who was found with her throat slit and a cleaned knife on her chest: Days earlier she’d told family: ‘I’m scared. He’s going to kill me’
C 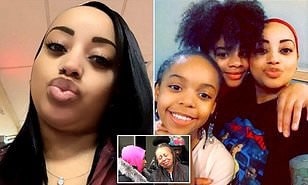 Police have charged a man with murder after a New York casino worker and mother-of-two was found dead at a housing project in the Bronx with her throat slit and a cleaned knife on her chest, Your Content has learned.

Bjana James, 37, was found at the Betances Houses NYCHA building in the Bronx.

Nashan Walsh, 35, was arrested on Saturday and later charged with her murder.

He was also charged with manslaughter and criminal possession of a weapon.

Ms James was found with her throat slit and a knife on her chest, police said.

Her family said she sent text about fearing for her life last Wednesday night.