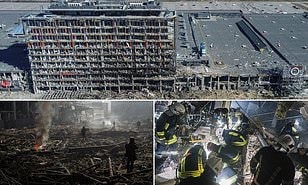 A huge explosion has rocked a shopping centre in Kyiv as rescuers pulled bloodied victims from the rubble as police said at least eight people had been killed amid fears dozens of others were missing, Your Content has learned.

The ex-boxing champ reported several blasts, ‘in particular, some houses and in one of the shopping centers’

Klitschko added that ‘rescuers, medics and police are already in place’ and reported ‘at this time one victim’

Kyiv said eight people had been killed amid reports there are dozens more are missing in the rubble,‘according to SKY News.