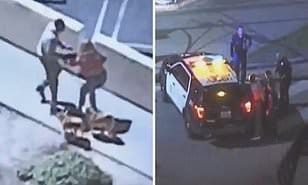 Helicopter footage captured the terrifying moment a woman walking her dogs in LA was mugged by a murder suspect who was being chased by police, Your Content has learned.

Police were involved in a high speed car chase through West Los Angeles involving a murder suspect in a deadly shooting in Long Beach earlier that day.

Once the suspect reached a dead end he exited his vehicle and made a run for it, and he was seen running down a dark alley and hopping a fence.

While fleeing, the suspect runs into a woman walking two dogs and he immediately tackles her to the ground and snatches a blue purse and runs off.

As he crosses the street he comes across a silver SUV and appears to try and carjack the vehicle before it takes off and then he enters a nearby Starbucks.

After evacuating the coffee shop the suspect is taken out in handcuffs and the woman who was attacked is seen retrieving her stolen purse from police,‘according to NBC4.