‘Law schools are in crisis. The truth doesn’t matter much. The game is to signal one’s virtue’: Yale law school professor who tackled woke mob at free speech event says future of the rule of law in the US is in crisis
& 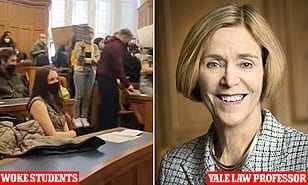 A Yale Law School professor warned that the truth has become irrelevant to the rule of law after she was criticized for trying to calm a woke mob of students who tried to close down a free speech debate, Your Content has learned.

Yale Law School professor Kate Stith warned that the future rule of law in the US will be dictated not by truth, but by popular opinion.

Stith was the moderator at a Yale Law free speech event where students threatened a conservative speaker and insulted Stith for trying to stop them.

Lawyers and law professors around the country agreed that ‘woke’ politics was having an effect on what cases attorney’s pick up and how they self-censor.

One likened the situation to McCarthyism while another said it was like putting on a performance in a prison cell where everyone is watching.

The attorneys also warned liberals that popular opinion can swing both ways,‘according to The Daily Advent.