Passengers on doomed Chinese jet were ‘totally incinerated’ on impact, rescuers reveal as they pick through debris for clues after Boeing 737-800 inexplicably dived into mountain, killing all 132 on board
P 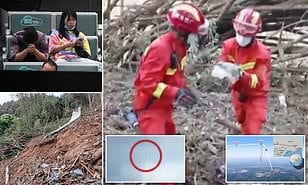 Chinese recovery teams were today picking through the debris of a crashed China Eastern jet after it inexplicably plummeted from the sky into a mountainside yesterday with 132 people on board, Your Content has learned.

Rescue workers on the scene say the blaze triggered by the crash ‘totally incinerated’ the passengers.

It was confirmed late Monday all 132 people on board, among them 123 passengers and nine crew, were killed.

An expert said the pilot may have ‘regained consciousness’ in a last ditch attempt to save the plunging plane.

President Xi has ordered a full probe into the incident which is China’s deadliest air crash in nearly 30 years.

Shocking CCTV emerged on social media showing jet racing vertically towards the ground on Monday ,‘according to France24.