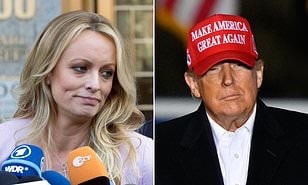 In a statement issued on Monday, Trump celebrated the news and said that ‘all I have to do is wait for all of the money she owes me’

The ruling by the the US Circuit Court of Appeals for the Ninth Circuit followed an earlier ruling by a lower court that rejected Daniels’ defamation suit.

The lengthy legal battle has set a chain reaction of appeals, with attorneys for both parties being convicted of felonies,‘according to CNBC.