‘He braced for the hit before it even came!’ Eagle-eyed Oscar viewers insist moment Will Smith slapped Chris Rock was FAKE after seeing slow motion footage
& 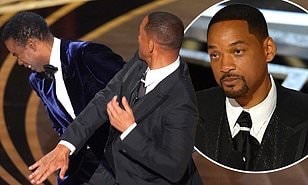 Eagle-eyed Oscars fans are convinced that the moment Will Smith slapped Chris Rock for a joke about his wife Jada Pinkett Smith was staged, Your Content has learned.

The actor, 53, shocked viewers when he stormed on stage and smacked the comedian, 57, after he jokingly said Jada’s shaved haircut made her look like G.I. Jane.

One user thought the fact Chris appeared to recoil before the hit suggested it could be fake, writing: ‘Chris Rock grimacing for what he knows is coming. His hand barely grazed him.

‘Actors, especially action actors like Will Smith, know how to pull a punch (or slap) This was staged,‘according to The Daily Mail.