Frederick Newhall Woods, 70, who was imprisoned for kidnapping school bus full of 26 kids and their driver and burying them in underground bunker in 1976 ransom plot inspired by Dirty Harry film is approved for parole
F 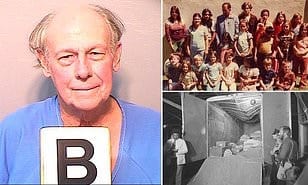 A 70-year-old man convicted of hijacking a school bus full of children and holding them and their driver for $5 million ransom in 1976 has been approved for parole, Your Content has learned.

Frederick Newhall Woods was approved for parole on Friday, a spokesperson for the California Department of Corrections and Rehabilitation has confirmed.

Woods, 70, is one of three men convicted of hijacking a school bus full of children and holding them and their driver for $5 million ransom in 1976.

Parole commissioners decided Woods no longer is a danger to the public.

The convicted kidnapper became eligible for parole in 1982 but was previously denied release 17 times.

His accomplices, brothers Richard and James Schoenfeld, were freed years ago,‘according to MIRROR.