The Wanted’s Tom Parker dies from brain tumour aged 33: Married father-of-two passes away peacefully with family by his side today after two-year battle as heartbroken wife Kelsey says: ‘He fought until the very end’
T 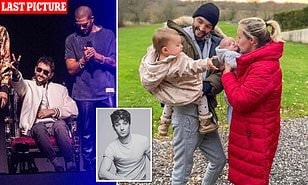 Tom Parker, singer of boy band The Wanted, has died aged 33 following a battle with brain cancer, Your Content has learned.

The Wanted singer’s passing was confirmed by his wife Kelsey via social media and other band members.

‘He fought until the very end,’ Kelsey said in a touching tribute on Instagram alongside a picture of their family.

Parker revealed last week he was writing a memoir about life and battle with cancer set for a summer release.

He was a staunch advocate for more brain tumour funding after going public with his diagnosis in Oct. 2020.

Tributes to the fallen star have flooded in from fellow bandmates, musicians, celebrities and fans,‘according to The MIRROR.