‘She pursued him, she wooed him.’ Johnny Depp’s lawyer tells defamation trial how ‘profoundly troubled’ Amber Heard went to great lengths to win him over before becoming violent and berating the actor
& 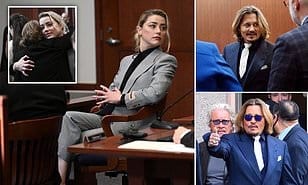 Johnny Depp’s attorneys have told how a ‘deeply troubled’ Amber Heard went to great lengths to pursue and woo the actor, before flipping the script and continuingly berating him, Your Content has learned.

The first witness will be called by Depp’s side, his sister Christi Dembrowski.

The former spouses are preparing to square off over a 2018 op-ed she wrote for the Washington Post calling herself a domestic violence survivor.

Depp claims he was booted from the Pirates of the Caribbean franchise because of the ‘clear implication’ he was the abuser in Heard’s op-ed.

He further alleges that his ex was the actual ‘perpetrator’ of the violent bouts that scarred their relationship.

The trial is expected to last six to seven weeks and celebrities tipped to give evidence include James Franco, Paul Bettany and Ellen Barkin,‘according to Deadline.