‘I may have to rethink my employment if that actually happens’: Woke Twitter staff slam Elon Musk’s $41billion offer for social media giant – as they enjoy ‘focus week’ with Monday off work and minimal meetings
& 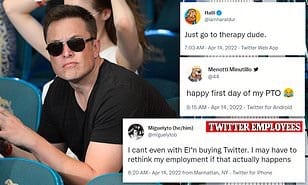 Musk, 50, insisted that his bid was his ‘best and final offer’, adding that ‘if it is not accepted, I would need to reconsider my position as a shareholder’

Haraldur Thorleifsson, a Twitter team lead who has criticized Musk in the past despite having ‘made me a lot of money,’ merely said ‘just go to therapy dude’

Miguel Barreto, a senior software engineer, went even further, saying ‘I may have to rethink my employment if that actually happens’

Ian Brown, a former employee, wrote: ‘Every clown out there thinks they can drive the clown car better than the clowns currently behind the wheel.’

Celebrities, particularly conservatives, were all the more positive about the potential takeover,‘according to NewsBreak.