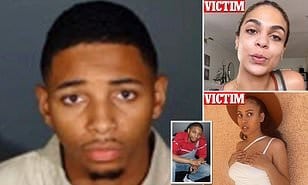 ‘Superfly’ actor and rapper Kaalan Walker shouted ‘I didn’t rape anybody’ as he was led away in handcuffs after he was found guilty of raping multiple women – some as young as 16 in a series of attacks dating back to 2013, Your Content has learned.

Kaalan ‘KR’ Walker, 27, was found guilty on Monday of raping multiple women – some as young as 16 in a series of attacks dating back to 2013.

The rapper and ‘Superfly’ star faces up to 100 years to life when he is sentenced, but his lawyer, Andrew Flier, vowed an appeal.

More than 30 women came forward with assault claims against him.

Walker had had originally been facing more than a dozen counts involving 10 alleged victims, but was acquitted of charges related to three of the 10.

Walker got his big acting break this year when he appeared in SuperFly in 2018.

His other acting credits include roles in the 2017 film Kings, with Daniel Craig and Halle Berry, and the BET legal drama In Contempt,‘according to The Daily Advent.