‘If I don’t walk away it’s going to be a bloodbath.’ Johnny Depp is heard arguing with ‘fat a**’ Amber Heard in audio played in court as the actor resumes testimony in $100m defamation trial
& 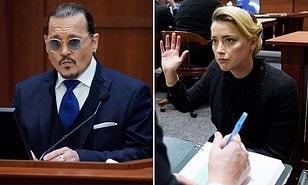 Johnny Depp was back on the stand Monday in his $100million defamation trial against ex-wife Amber Heard, Your Content has learned.

Johnny Depp was back on the stand Monday in his $100million defamation trial against ex-wife Amber Heard.

The court heard a number of audio recordings of Depp and Heard arguing – it was not clear who took each one but it was one of the parties.

‘The next move, if I don’t walk away, it’s just going to be a bloodbath. Like it was on the island, it’s not worth it. Why be miserable, can we just have some understanding?’ Depp said.

During another recording Heard and Depp can be heard arguing, when Depp shouts: ‘You’re a f**king c**t!’

Depp is suing Heard for $50 million over a piece she wrote in the Washington Post in which she described how she had been a victim of domestic abuse.

She is countersuing for $100 million claiming Depp libeled her by calling her a liar,‘according to The Independent.