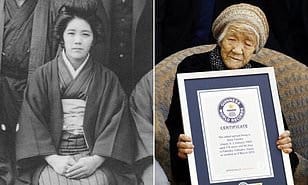 A Japanese woman certified the world’s oldest person has died at the age of 119, local officials said Monday, Your Content has learned.

Kane Tanaka was born January 2, 1903, in the southern Fukuoka region of Japan.

She was born in the same year the Wright brothers first flew their plane.

Ms Tanaka married her husband Hideo a century ago and had four children.

She was officially recognised as the world’s oldest person in 2019,‘according to The Daily Advent.