‘I’m back!’ Donald Trump posts first message on his new platform Truth Social together with a photo of himself at Mar-a-Lago – and even jokes about his infamous misspelt ‘COVFEFE’ tweet
& 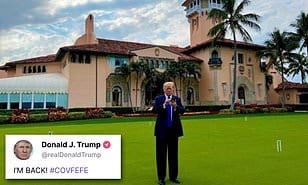 Donald Trump has made his debut on his Twitter rival Truth Social with a self-deprecating gag about one of his many controversial tweets, Your Content has learned.

Donald Trump, 75, returned to social media for the first time in more than a year.

He posted from his app Truth Social, writing: ‘I’M BACK #COVFEFE’

He made a joke about his infamous 2017 tweet, where he suffered a misspelling while criticizing the media’s coverage of his administration.

Trump said he would not return to Twitter, even if Elon Musk reinstated his account, and said he doesn’t view the social platforms as rivals.

‘We want liberty and justice and fairness in our country, and the more we can have open, the better, but no, I don’t view that as a competition,’ he said.

He also said his app would not censor like Twitter has been accused of doing,‘according to FOX NEWS.